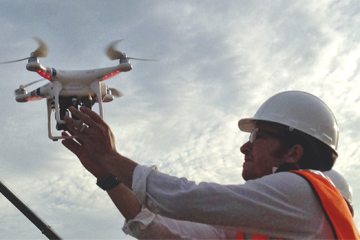 If what you know about drones comes mostly from the evening news, you may think that the unmanned aerial vehicles (UAVs) are used entirely for tearing stuff down. That's because of the highly publicized use of drones for military strikes in foreign lands and the increasing stockade of drone footage capturing the devastation of natural and other disasters around the world. Turns out that the flying machines can also be quite useful in creating things like buildings and bridges.

Ever wonder how the Egyptians built the pyramids without modern machinery? So have a lot of other people. There may very well come a time when drones replace cranes as the equipment du jour for lifting heavy objects – like giant stone blocks – and moving them into place. At present, however, the greatest benefit that drones provide for builders is that they can go places where people can't easily get [source: Lavars].

The construction industry is using drones in the same way as foreign intelligence gatherers, search and rescue operatives and hobbyists who take their UAVs out on Sundays for a lap in the park. That is, they're strapping a camera to the flying machines to create an eye in the sky. For builders, the view from way up there allows them to better develop work plans, track progress and check for problems along the way [source: Lavars].

Mapping a construction site has traditionally been a long, labor-intense and painstaking process that requires time, skill and a fair bit of cash. For large projects, it often means hiring a plane to fly over the site and take photos. With the rise of effective and relatively cheap drones, however, construction outfits can save some time, effort and dough. Drones can be programmed to weave in and out of construction areas, collecting footage and information as they whirl about through the air. Some are even designed to send that information directly to project mapping software or a three-dimensional printer to create and update models of the work as it progresses [source: ENR Southeast, Nicas, Ehrenberg].

At the Aspern Vienna Urban Lakeside development project in Austria, for example, project managers rely on small octocopter drones to film on-site conditions. The flying machines' routes are programmed via global positioning systems (GPS). The information they capture is used to create a 3-D model of the project that allows builders to track construction progress and adherence to the original plan. Researchers are currently working on enhancing the technology so drone models are color-coded to point out potential trouble areas in the project [source: Ehrenberg].

Some drones are even setting the stage for other smart construction technology. Japanese equipment manufacturer Komatsu leases drones designed to survey a project and build a three-dimensional model that can be updated as work on the ground progresses. A company official told the Wall Street Journal that the drones can do surveying work in a few hours that otherwise would take two workers a full week to complete. Komatsu also offers driverless bulldozers that operate using the information gathered from drone sensors and displayed in the model. As the bulldozers do their work, another set of sensors collects information to update the model accordingly [source: Nicas].