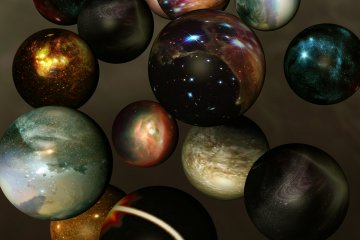 When you pictured yourself as a grown-up, perhaps you had some idea that you would be sophisticated. Intelligent. Urbane, even. The kind of adult who went to dinner parties and spoke in honeyed words on philosophy, the topics of the day, the big questions of science.

Then you grew up and discovered that when you went to a friend's house for a backyard BBQ (stuffy dinner parties being, it turns out, mostly fiction), you were instead shouting at your children to get off the pile of compost, drumming up sympathy about having to redo your roof, and trying not to let on to the fact that you don't remember the name of the person you're talking to.

In other words, you might find yourself yearning for a little more intellect and far fewer honey barbecue wings. Next time, try this question to un-numb your mind: Can supersymmetry and the multiverse both be true?

To sort this out, we'll start with a lesson on supersymmetry. To understand supersymmetry, you should first get a grasp that it – in itself – isn't a "theory." Supersymmetry is an extension of what we call the Standard Model, which tells physicists what particles exist and how they work at a fundamental level. Basically, it accounts for 12 fundamental particles and four forces that they interact with.

The Standard Model, unfortunately, can't explain really pesky discrepancies in the universe's workings. For instance, it doesn't have any solution for what dark matter is: That's a still-unseen variable that seems to populate more than a quarter of our universe [source: NASA].

Supersymmetry tries to fill the holes in the Standard Model by saying that for each known matter particle we have, there is a much heavier force particle, and vice versa [source: Fermilab]. These "superpartners" would be a big help in understanding the Standard Model. They would also help explain things like dark matter, since the very lightest superpartner would be a good candidate for the mysterious stuff.

Perhaps even better for physicists – who have so far been delighted to confirm natural answers to physics questions – supersymmetry would provide an elegant solution for the Standard Model's deficiencies. It would work with mathematical equations, as well as perfectly balance out the mass of the Higgs boson to what we've observed, thus explaining why the Higgs is so much lighter than the Standard Model alone predicts that it should be. It would be neat and tidy.

And yet, there is a decidedly messy problem with superpartners. It's the tiny little detail that they don't seem to exist, at least, not in the same proton collisions that led us to the Higgs boson. That's where all the mathematical models predict that they should be – but they're not. You don't have to be a particle physicist to know it's a problem when something doesn't exist where you expect to find it.

Physicists haven't completely thrown in the towel, though. The Large Hadron Collider is set to collide at higher energies when it turns back on in 2015, and many are hoping that the collisions will result in some cool phenomena, including finding superparticles at higher masses than were possible in the collisions done so far.

However, other physicists are looking for other explanations in case supersymmetry turns out to be a pipe dream. Say hello to the multiverse.

More specifically, say hello to the multiverses. There are lots of 'em. The basic idea of the multiverse is that our universe is just one in an infinite soup of . . . well, stuff? Whatever it is, all these multiverses turned out the way they did, following the laws they have, randomly. Our universe was lucky enough to turn out just right to create us, and all the other junk in the cosmos. Which might sound special and fun to you and me – I mean, look how amazing and different we must be than all those other dumb universes! – but to a lot of physicists, the multiverse is a messy, messy baby.

Think a little closer about what being in a multiverse implies. Supersymmetry is the valedictorian of the class. She's got fundamental matter and forces that work just so in concert with each other to assure us that she is predictable and constant. Multiverse, on the other hand, basically slammed an energy drink, walked into the SATs and got a perfect score. Maybe he guessed; maybe he really did know all the answers. It doesn't matter. But we can easily trace supersymmetry's success to being methodical and predictable, while the multiverse has no record for being such a brilliant student – instead, it's all haphazard chance.

To some scientists, that's deeply disturbing. If we are part of a universe where things work one way just because that's randomly how things work here – knowing that in another universe they work differently, just because – they may as well throw in the towel. What's the point of figuring it out if it's nothing but random chance? The whole thing implies that we've been asking the wrong questions all along. It's not "Why do we observe the universe acting this way?" but perhaps "How does another universe act?"

So now that we understand supersymmetry and the idea of the multiverse, do we have any hope of trying to reconcile them? It's important to remember, first off, that we're talking about theories that go beyond the Standard Model – neither supersymmetry nor the multiverse is attempting to identify or even define the fundamental particles that we've directly observed [source: Willenbrock]. They're just two ways of trying to figure out why the fundamental matter and forces interact the way they do.

And in some ways, we can shorten our question to ask simply, "Can supersymmetry exist in a multiverse?" The answer to that: Absolutely. As we said, the idea of multiverses leaves open a pretty infinite number of universes. How they're ordered – that is, if they work like ours or differently or kind of the same or a little different – is completely open to question. It's reasonable to assume that if there were an infinite number of universes, one of them might operate supersymmetrically. Anything can happen in another universe, and if there's enough of them – everything will.

Supersymmetry, remember, would make a natural – and hopefully observable – order to the way particles and force functions in our universe. It's not a theoretical idea about the nature of the cosmos, unlike the multiverse. So supersymmetry and the multiverse aren't exactly mutually exclusive, and they are positing some solutions to similar questions. But they're concerning themselves with different enough ideas that we could theoretically have both occurring at the same time.

Author's Note: Can supersymmetry and the multiverse both be true simultaneously?

All About the Particles 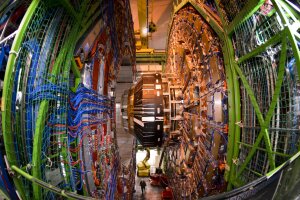 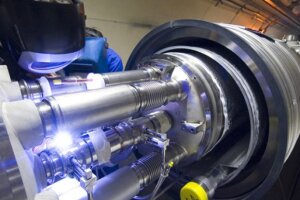