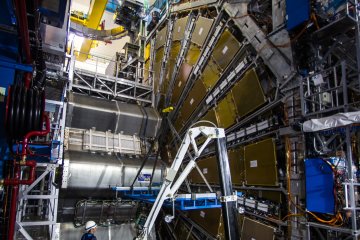 When the Large Hadron Collider was first turned on in 2008, there were seemingly endless possibilities – and ideas – for what it might find. Maybe it would spot the elusive Higgs boson, which would help scientists confirm how other particles gain mass. Maybe it would uncover a host of new particles that would give physicists not just confirmation of supersymmetry, but also a bonanza of new science to study. Maybe it would create a new universe where it was OK to eat Cheetos for dinner and protons looked like Froot Loops.

Some of these possibilities were more likely than others. And a few of them (ahem) were, in fact, not really within the LHC's scope. While naysayers predicted that the LHC's mini Big Bangs would create black holes that would destroy the world and eat the universe like so many Cheetos for dinner, the truth is that there weren't that many theories that the LHC could prove or disprove.

And in terms of that scope: No, the LHC is not going to prove string theory – but it might provide evidence to support ideas that are central to string theory.

The only thing we can say for certain is that the wet ball supports all those theories, and perhaps rules out the theory that the tunnel is bone-dry. At the LHC, physicists with very disparate ideas are looking for "the ball is wet" statements to support – or refute – theories about how particles (and the universe) work. One of those theories is string theory.

String theory basically says that particles are composed of energies that resemble vibrating strings. The distinctive vibrations of the strings create all the different particles and forces. So, fundamentally, all matter and forces in the universe are made of these vibrating strings [source: Greene]. But here's a fun fact: String theory doesn't really become a unifying theory – one that can explain the makings of every force and particle in the universe – unless it turns out that the universe also has more than three dimensions. Which, you know, is hard to get a lot of physicists to shake hands on.

And for good reason. This not being Hogwarts, we can't just apparate into another dimension to check on whether it's really there. We can only look around and see three observable dimensions in front of us. But you might be able to talk yourself into believing it if you think of the dimensions as really, really tiny ... maybe they're just too small to see.

That creates a problem: If the necessary dimensions are too tiny to see, how the heck can we expect to observe – or even test a hypothesis about –string theory?

That's where the LHC comes in. There are a few ideas being bandied around to test some of string theory's characteristics. One is pretty straightforward: The simplest model of string theory predicts the existence of superpartner particles. Basically, these are much heavier partners to the Standard Model quarks and leptons that physicists have already observed, and they would unite force and matter. Physicists expected to find superpartners in the same mass as the Higgs, but they haven't yet. So, the LHC is doing its darndest to try to find those superpartner particles, both in their latest proton collisions, and in future experiments at even higher energies. The "wet ball" in this case – superpartner particles – would also support the theory of supersymmetries, which is connected to, but separate from, string theory.

The LHC can also jump into the hunt for those ultra-tiny dimensions that would have to exist for string theory to work as a unified theory. If those dimensions exist, we'd be pretty much swimming in them. LHC can slam protons together to produce new particles – just like it's been doing. By adding up the energy of the particles formed in the collisions and subtracting it from the energy the particles pre-collision, we can tell if some of the energy is MIA. If it is, we might then be able to say, "Hey, we don't know where that energy went – but maybe it's in another dimension."

This time, the wet ball is the difference in energy before and after the collision. Again, this wouldn't be "proving" string theory or even extra dimensions. But it would be ascientific discovery that supports some of the things necessary for string theory to work.

What we can't predict is whether string theory will mature into a scientific hypothesis we can test or observe. Right now, one of the reasons it's so controversial is that many physicists don't think it's possible to test, and more importantly they don't think it's possible to prove false. Some in the physicist community are comfortable saying that string theory is straight-up not falsifiable [source: Nature Physics]. (That means that you have to be able to disprove the hypothesis, not just confirm it.)

So, while we can be reasonably certain that no, the LHC isn't going to prove string theory is true using proton collisions, physicists might find some evidence that doesn't prove it wrong.

Listen, I'm as terrified as the next guy to say that string theory is good or bad. Physicists are nuts about it, on both sides of the coin. To learn more about string theory or the controversy around it, check out the sources for further reading.