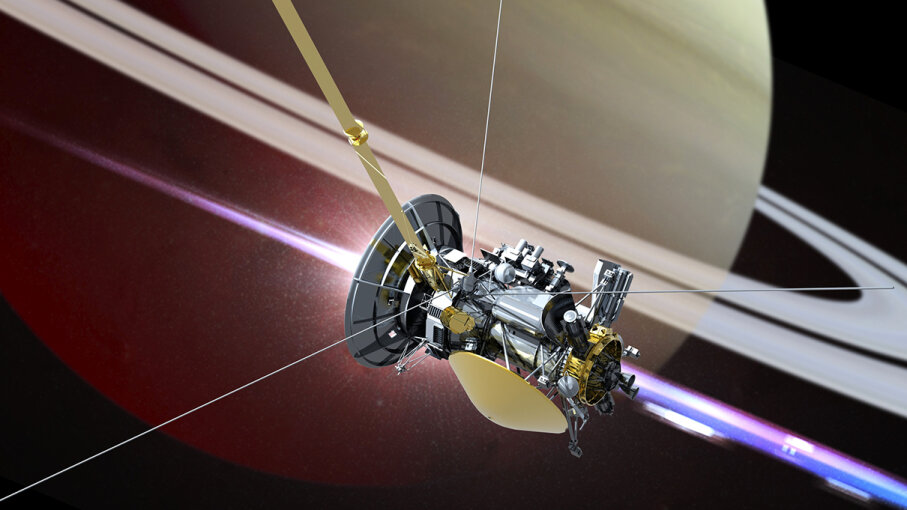 Back in October 1997, NASA and its partners, the European Space Agency and Italian space agency Agenzia Spaziale Italiana, launched the Cassini spacecraft on a billion-mile, seven-year journey to Saturn.

At the time of its launch, the schoolbus-sized vehicle set out on the most distant planetary orbital mission ever, and when it reached the distant gas giant in 2004, the data its instruments collected yielded some astonishing revelations.

As NASA explains on its website, among other discoveries, Cassini revealed the icy jets that shoot from Saturn's minuscule moon Enceladus, which showed evidence of an underground ocean with hydrothermal activity within it. The probe also detailed the chemical composition of the hydrocarbon lakes on Saturn's biggest moon, Titan. It also provided a glimpse of a giant storm that encircled the entire planet for nearly a year. Cassini's observations also helped to solidify scientists' knowledge of processes involved in planetary formation. And over the last seven years, the satellite has observed seasonal changes on both Saturn and Titan.

Not quite 20 years later, Cassini is nearly out of fuel. NASA has decided the probe's mission will end in a spectacular way. Back in April, the satellite was instructed to go on one last adventure — a series of 22 orbits, each of which has involved diving into the 1,200-mile (2,000-kiliometer) gap between the planet and its trademark rings, to get one last look at those features.

On Friday, Sept. 15, 2017, Cassini will make one last run at the sixth planet from the sun. This final time, its programming will instruct it to dive into the planet's atmosphere on a suicide mission. It will continue to transmit scientific data for as long as its thrusters can keep Cassini's antenna pointed at Earth. Shortly after that, the satellite will burn up like a meteor and disintegrate.

Cassini, named for the 17th-century astronomer Giovanni Domenico Cassini, is being deliberately destroyed for a reason. Scientists want to avoid having it accidentally collide with Saturn's 62 moons. Specifically, they want to avoid penetrating the atmospheres of Enceladus and Titan; research has shown those two moons may have environments that could provide the "prebiotic" conditions for life eventually to exist.

Now That's Interesting
Cassini carried ESA's Huygens probe to Saturn. In 2005 Huygens descended to the surface of Titan, the first time that an Earth spacecraft ever landed on the moon of another planet; the lander transmitted for 72 minutes before losing contact with Cassini.