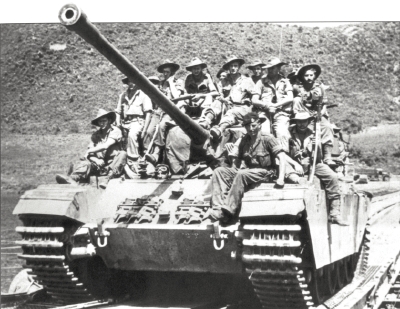 The development of the Centurion Main Battle Tank began in 1943 when the British Army asked for a new cruiser tank equipped with at least a 17-pounder gun. They wanted a fast tank that, even though heavily armored, would perform well in cross-country travel.

Prototypes of the new tank, known as the A-41, were built and sent to Germany in 1945, but the war ended before they saw combat.

At first the Centurion, as the new tank was named, did not represent much, if any improvement over medium tanks then available. In fact, it compared well with the Nazi German Panzerkampfwagen V Panther, which had entered service two years earlier.

Even the next-generation Centurion seemed a shadow of the Panther. When the Centurion Mark (Mk) 3 (not to be confused with either the World War I Marks or the Matildas of World War II) was developed, it was equipped with an 83.4mm, or 20-pounder, gun.

The up-rated Panther, which had design work completed but never entered production, was to be equipped with the 88mm gun used on the Tiger II. Both guns had muzzle velocities very close to 3,340 feet per second.

Even so, the Centurion 3 Main Battle Tank was the most heavily armed tank of its category in the immediate postwar years. But strangely enough, neither the tank's design nor even its gun design, was responsible for this.

The Centurion 3 fired a new round that used a narrow diameter, finned, solid steel spike, or arrow, that was wrapped in a light metal jacket to give it the same diameter as the bore. This new round was called an armor-piercing, discarding sabot (APDS) round, and it left the muzzle of the 20 pounder at 4,800 feet per second. It could penetrate twice as much armor as the 88mm gun.

The Centurion 3 Main Battle Tank was a commercial, as well as a military, success. It was adopted by Australia, Canada, India, South Africa, Sweden, Switzerland, and other nations.

The Centurion was perhaps the first tank to face itself in a shooting war. Egypt, Iraq, and Israel bought Centurions and used them against one another in the 1967 and 1973 Arab-Israeli wars. The United States purchased Centurions and gave them to Denmark and the Netherlands under the Military Aid Program.

To learn more about the Centurion Main Battle Tank's equipment, continue to the next page.

The Centurion Main Battle Tank 5, 6, 7, and 8 models were successively up-armored and up-gunned with the 105mm L7 series of guns.

The final version, the Centurion 13, was equipped with the 105mm L7A2 gun, the same one used on the West German Leopard 1; the Israeli Merkava; the American M-48A5, M-60, and M-l Abrams; the Japanese Type 74; and the Swedish Strv 103B Main Battle Tanks.

The engine compartment was in the rear and separated from the other two compartments by a fireproof wall. The engine and transmission drove the rear sprockets.

A Horst-mann-type suspension system was used, in which three units on a side each hold two road wheels on one set of concentric springs. Six return rollers were employed, but these were hard to see on the later model tanks since skirt armor for protection against high-explosive, antitank projectiles covered most of the tread.

Infrared searchlights and driving lights were installed on later variations. Maximum armor thickness was 6 inches on the turret front and 4.6 inches on the hull glacis plate.

The Mark 13 is a more recent variation of the venerable British Centurion MBT. It is equipped with a 105mm main gun, a ranging machine gun, and an infrared searchlight.
©2007 Publications International, Ltd.

The L7A2 main gun had an effective range of 1,968 yards when using armor-piercing, discarding sabot rounds and 4,374 yards when using high-explosive squash head rounds. Trained crews could fire up to eight rounds per minute.

The main gun was aimed using a coaxially mounted .50-caliber machine gun that fired tracers in three-round bursts up to a range of 1,968 yards. The gunner watched the tracer rounds through a periscope gun sight and set the range on a drum device linked to the main gun.

Two 7.62mm NATO machine guns were also carried, one mounted on the commander's cupola and the other coaxially to the left side of the main gun for use against unarmored vehicles and enemy personnel. Later variations of the Centurion had 12 smoke dischargers, six mounted on either side of the turret.

Although the Centurion went out of service with the British Army, it continued to be a potent punch in the arsenals of Denmark, Israel, Jordan, the Netherlands, South Africa, Somalia, Sweden, and Switzerland.

The British Centurion Main Battle Tank entered service in 1945 and has since served in virtually every war zone from Burma to the Middle East.
©2007 Publications International, Ltd.