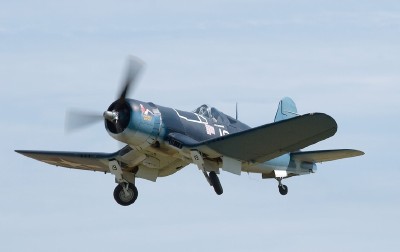 Although designed as a carrier-based fighter, the bent-wing Chance Vought F4U Corsair did not fill that role for the U.S. until after it had successfully done so with Britain's Royal Navy, in 1944. See more flight pictures.

One of the most famous and long-lived fighters of World War II, the Chance Vought F4U Corsair represented a tremendous departure from all past practices of the venerable Chance Vought firm. Long noted for scout biplanes, the company had barely moved into the future with its attractive but not very successful SB2U Vindicator, which saw limited combat and was replaced as soon as possible.

Rex Buren Beisel, a veteran of the Navy's Bureau of Aeronautics, created an advanced design that won a 1938 competition and created what is to many the best fighter aircraft of World War II, and one of the very best carrier-based fighters of that period.

­The XF4U-1 made its first flight on May 29, 1940, piloted by Lyman A. Bullard, Jr. Powered, like the Hellcat, by the wonderful 2,000-horsepower Pratt & Whitney R-2800 engine, the F4U flew at 404 miles per hour by the end of the year, faster than any U.S. fighter in production. The classic airplane would stay in continuous production until December 1952, by which time 12,571 had been built.

The Chance Vought F4U Corsair had initial problems qualifying as a carrier fighter in the U.S. Navy, although it reached that status in the Fleet Air Arm in 1943, operating from escort carriers. The Marines used it with great success as a land-based fighter, and by April 1944 the plane was cleared for carrier use with the U.S. Navy.

Prior to 1944, America utilized the Corsair as a land-based fighter assigned to the Marine Corps.

The speed, strength, and firepower of the Chance Vought F4U Corsair enabled it to dominate Japanese opposition, shooting down 2,140 against a loss of 189. Its performance and dependability allowed great flight leaders like John Blackburn, John Smith, Marion Carl, Joe Foss, and Pappy Boyington to create legendary fighter squadrons.

The "Bent-wing Bird," as the classic airplane was fondly called, went on to give yeoman service as a ground-assault plane in the Korean War, and for the French in Indochina.