Browse the article Is China winning the new space race? 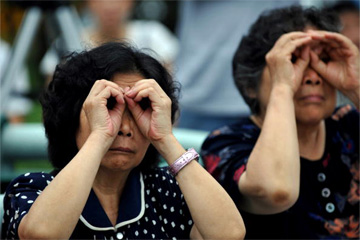 The people of China have turned their gaze to space -- and not just for the occasional solar eclipse.
China Photos/Getty Images

Scarcely more than two months later, China launched its Tiangong-1 ("Heavenly Palace 1") space laboratory into orbit aboard a Long March-2FT1 rocket, laying the orbiting cornerstone for what will eventually be a larger crewed space station. China has scheduled the outpost for completion in 2020 -- the same year the ISS is slated for decommission -- or perhaps as early as 2016.

When the veteran ISS concludes its low-Earth-orbit tenure, its fiery arc across the Pacific Ocean sky will mark the culmination of one era and the commencement of another, one in which China will own and operate the only space station circling the planet. The fact is a bit ironic, in view of America's prior rejection of Chinese participation in the ISS on the grounds that the nation had little to offer (later snubs revolved around alarm concerning China's potential space-related military plans). In any case, U.S. astronauts are unlikely to carpool on Chinese rockets or log hours in the planned Tiangong lab any time soon.

Given the demise of the Constellation program endorsed by President George W. Bush and the storm surrounding NASA's Senate-mandated Space Launch System, announced on Sept. 14, 2011, China's ascent has prompted some to wonder if the Eastern giant now stands poised to replace America as the dominant space power.

China upped the ante on Dec. 29, 2011, when it publicized its ambitious five-year plan for space exploration, evoking fading echoes of the U.S.-U.S.S.R space race under way at the height of the Cold War. At stake, then as now? The prestige of nations: Achieving spaceflight demonstrates economic power and proclaims to the world that a nation's technical prowess and scientific acumen are on a par with the best.

Furthermore, then as now, military applications overshadow scientific advancement, terrestrially and in space. What began with spy satellites and space-kissing ballistic missiles culminated in 1983 with President Reagan's Strategic Defense Initiative (nicknamed Star Wars by opponents) -- a combination of ground- and space-based systems intended to shield the U.S. from nukes. Today, global powers remain contentious over such missile defense "umbrellas." Meanwhile, both the United States and China have tested systems for shooting down satellites [sources: Lague; Wolf].

Although China has stated that it "opposes weaponization or any arms race in outer space," the communist nation does not draw clear divisions between its military, civilian and scientific sectors, and its space program maintains strong ties to its concomitant military expansion [source: Wong and Chang; IOSC].

Arms race or no, China's headway in space has been steady. Read on to find out where the Middle Kingdom plans to take its program in the near future and whether taikonauts will soon rule the skies. 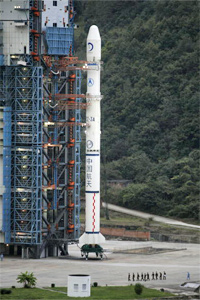 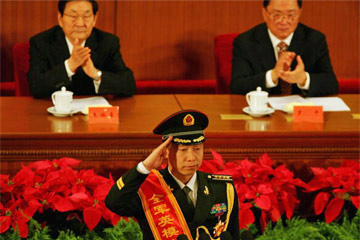