Life as an Upperclass Cadet 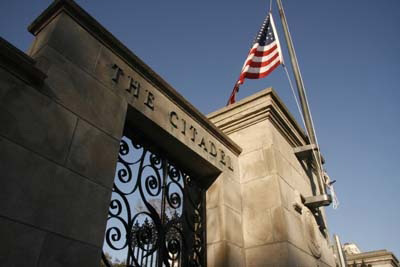 Coming through those gates as an upperclass cadet gets a little easier after you survive your first year as a knob.
Photo courtesy Russell K. Pace/The Citadel

­Once a cadet returns in his or her sophomore year (third class), life is more relaxed. Third-class cad­ets don't have to walk at 120 steps per minute. Occasionally, they might even slouch during mess, but habit probably dies hard. Their responsibilities include maintaining the bulletin boards of the barracks, as well as keeping a neat room, clean uniform and proper appearance. During their second semester, third-class students have the opportunity to become rank holders, taking on leadership responsibility among their peers if their academics, discipline record and military training are in good standing. Rank isn't a given. Some cadets will enter as cadet privates and graduate as cadet privates.

­As cadets progress from third class to second class (juniors) and first class (seniors), they can take on more responsibility in the Corps of Cadets. For example, each year a select group of first- and second-class cadets are asked to help train the following year's knobs. Throughout their college career, cadets have opportunities to learn leadership skills, especially how to motivate their peers. In addition to their academic studies, they can take on administrative duties in the running of the squads and battalions.

Indeed, The Citadel heavily emphasizes leadership skills in its students. At a regular college, motivated students tend to have to seek out leadership opportunities, whether in student government or in another capacity, such as resident assistant. The Citadel also offers a minor in leadership studies through its Krause Center for Leadership and Ethics.

­All cadets can participate in athletic and intramural activities as part of their physical training. The Citadel has many collegiate sports such as basketball, football, baseball, soccer and others. And as you well know by now, those sports aren't just for men.

Pat Conroy and The Citadel

Pat Conroy, a well-known alumnus who graduated in 1967, wrote a fictional novel based in part on his Citadel experience called "The Lords of Discipline" first published in 1980. The novel describes cadet life at a fictional southern military academy. Although the novel was well-received by the public, it didn't necessarily paint life at a military college in a positive light. In 2001, Conroy raised money to help renovate what is now The Citadel Alumni Association's banquet hall. That same year he delivered the commencement address to the Class of 2001.