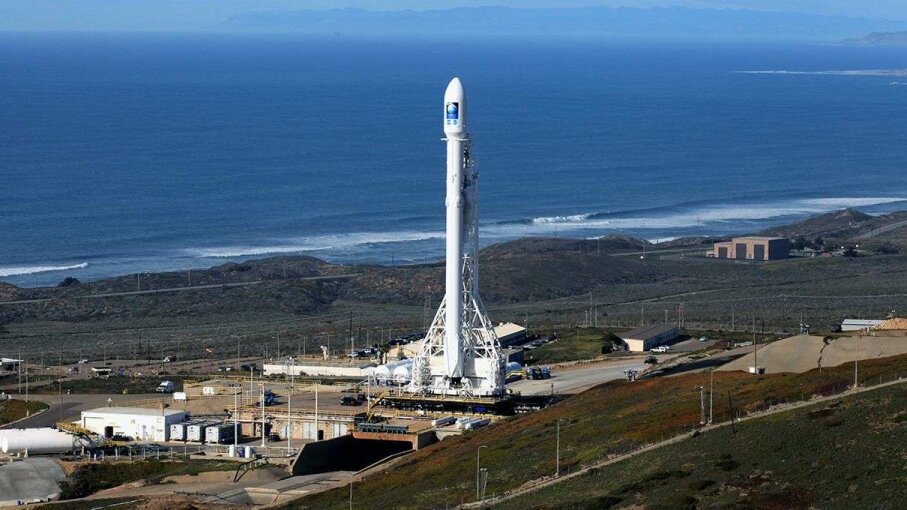 SpaceX came close to a milestone today when its Falcon 9 rocket deployed a NASA satellite into space, and then had the first stage robotically guide itself to a landing on a drone ship floating off the coast of California.

The private space-launch company tweeted at 2:07 p.m. EST that the rocket stage had not achieved the designed soft touchdown, but instead had suffered a hard landing, broke a landing leg and blew up. Here's the video of that landing.

The satellite link set up to provide a live video feed from the drone ship went down because of weather, so no video was available.

However, the Falcon 9's main mission of deploying a research satellite into orbit was a success.

The private space-launch company previously had landed the first stage of a rocket on the ground at Florida's Cape Canaveral in December. (From Vine, here's a video of the December landing.)

Two previous attempts — in January and April 2015 — both came close, too, but also ended in crashes. Here's a video of the second attempt, which shows the difficulty of the feat.

The Los Angeles Times compared the feat to throwing a pencil over the Empire State Building, then having it come back and land on the top of a shoebox without tipping over.

Nevertheless, at a press conference on Friday, SpaceX Vice President Hans Koenigsmann said he was hopeful of success. “We had a really good landing last time, so things are looking good at this point in time," he told reporters, according to Space.com.

The successful ground landing in December boosted SpaceX's confidence, because the booster returned to Earth undamaged and its nine engines passed a recent firing test, according to a tweet from SpaceX founder Elon Musk.

On Friday, the Falcon 9 — with Jason 3 attached to it — was rolled on a flatbed truck to the launch site.

The Falcon 9 rocket that will loft the Jason-3 oceanography satellite into orbit is rolled out to Space Launch Complex 4 East at California's Vandenberg Air Force Base in preparation for launch today.
SpaceX

The Falcon 9 space vehicle lifted off from Vandenberg Air Force Base in California at 1:42 p.m. EST. About two minutes after launch, the Falcon 9's first stage separated from the second stage. The second stage carried, Jason-3 satellite, a joint project of NASA, NOAA, the French space agency CNES, and the European climate satellite collective EUMETSAT. The satellite is designed to study ocean topography from orbit.

The second stage coasted in orbit for another 45 minutes before restarting its engine to place Jason-3 into orbit. The satellite successfully was deployed at around 2:40 p.m EST.

As the Falcon 9's first stage began its descent, it fired its engines again three times to start the landing process. The process is described in a release about a previous attempt on SpaceX's website. First, the engines fired a boostback burn, which adjusted the Falcon 9's impact point. Shortly after that, a supersonic retro propulsion burn slowed the rocket stage's speed from 1,300 miles (2,092 kilometers) per second to about 250 miles (402 kilometers) per second. As GPS equipment guided the Falcon 9 toward its destination, the rocket engines did a final landing burn, during which the speed slowed to just 2 miles (3.2 kilometers) per second as the booster's legs deployed to cushion the landing. One of those legs broke on the hard landing, resulting in the rocket tipping over and exploding.

The rocket stage's target was a robotic ship with no human crew, positioned 186 miles (299 kilometers) south of the original launch site. It was a difficult undertaking, because the landing platform was small — just 300 by 170 feet (91 by 52 meters) — and the ship wasn't entirely motionless, despite being held in by thrusters that took the place of an anchor.

A forecast calling for ocean waves of 10 to 13 feet (3 to 4 meters) in height near the landing spot made things even dicier.

To maneuver to that spot, the Falcon 9 first stage employed four hypersonic grid fins, which had been stowed during its ascent into space. Each fin was designed to move independently for roll, pitch and yaw. Combined with engine gimbaling — that is, thrusts from a swiveled nozzle that help change the angle of the vehicle — the system successfully guided the rocket stage back to Earth.

SpaceX provided a webcast of the launch on its website, but a satellite link providing video of the drone ship landing pad went down because of bad weather.

The water landing would be an important step in achieving SpaceX's goal of reusing its rockets, which would reduce the cost of space launches by a factor of 100, and make it more affordable to launch space satellites. Musk has said that those price reductions would help make Mars colonization more economically feasible, according to Scientific American.

The platform used in the landing is known as an Autonomous Spaceport Drone Ship, or ASDS. It is a 15-year-old repurposed barge that once had a very different job.  Its previous owners submerged it under the keels of sunken vessels and then refloated it to recover them, Nasaspaceflight.com reported.