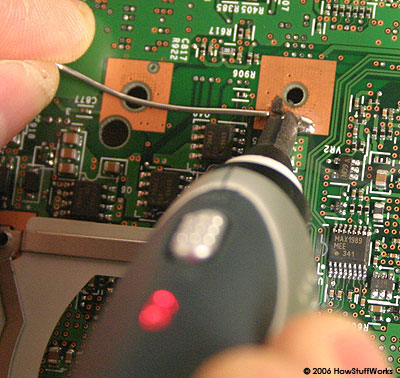 The original marketing materials for the Cold Heat tool described its tip as a patented composite material known as Athalite. We suspect it's made from graphite (a form of carbon) or a substance primarily composed of graphite. Here's why:

If the tip is really made from a patented compound, another company owns the patent for it. Hyperion Innovations, maker of the Cold Heat tool and owner of the patents describing it, does not own a separate patent for a compound material. In addition, the only patents that list Grigore Axinte -- inventor of the Cold Heat soldering iron -- as the inventor describe tools, not compounds.

Unfortunately, graphite can be brittle. One of the most common complaints in product reviews and message board posts is that the Cold Heat tip breaks during normal use. Unfortunately, using the recommended light pressure on the tip wasn't sufficient to complete a circuit when we tried to use the tool. Just after we successfully completed a circuit and melted some solder, our tip broke.

We have heard that some people love their Cold Heat tools. We suspect that they have the knack for using just the right amount of pressure at just the right angle, completing a circuit without shorting out any electrical components being soldered or breaking the tip.

For lots more information about soldering, electronics and related topics, check out the links below.