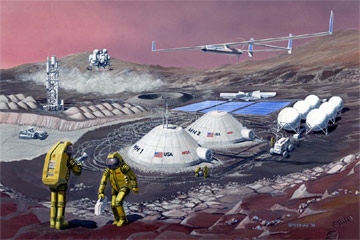 Some space experts have argued that NASA should focus on going to Mars instead of returning to the moon. But President Trump's appointee as NASA chief, Jim Bridenstine, has reassured Mars proponents that despite Trump's switch to prioritizing a lunar mission, the space agency still intends to go to the red planet. Bridenstine has said that returning to the moon will enable the agency to develop technologies for an eventual Mars mission, including "precision landing systems, methane engines, orbital habitation, surface habitation, surface mobility, long duration life support operations and much more" [source: Smith].

Since NASA's December 2017 shift to focusing upon returning to the moon, it hasn't put out any updated plans for making a manned landing on Mars and establishing a human colony. But in a plan that the agency published in 2015, the initial mission would be complex. Astronauts would make the 180-day trip to Mars in a crew habitat module, a two-level container that would double as a habitat on the Martian surface. By the time the astronauts landed, a separate laboratory module, a rover vehicle and other equipment — including a nuclear reactor — and supplies already would be waiting for them on the Martian surface, after being transported there by robotic spacecraft. Another spacecraft, fueled for a return to Earth, would be positioned in orbit to enable the initial crew to eventually return to Earth [source: NASA]. Subsequent missions might expand that original base or set up others to form a Mars colony.

On Mars, human colonists would have to grow their own food. NASA has been experimenting with growing vegetables on the International Space Station, and also has developed simulated Martian soil, which contains nutrients that plants would need to survive, to better understand how it could be used to grow crops [source: NASA].

Over the years, science fiction writers and futurists have speculated about the possibility of terraforming Mars, to transform its environment to something closer to Earth's. One approach would involve releasing carbon dioxide trapped within the Martian surface to make the atmosphere thicker, which also would help to trap solar radiation and warm the surface. However, a NASA study published in 2018 concluded that the Martian surface doesn't contain enough CO2 to be put back into the atmosphere to create a greenhouse effect, and it wouldn't be possible to extract much of what is there with present technology [source: NASA].

In the next section, we'll talk about the possibility of colonizing an asteroid or dwarf planet. 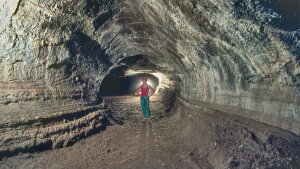