Heading for a Planet in Another Star System 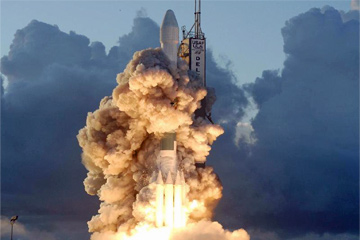 The Dawn spacecraft began its 1.7 billion-mile journey in 2007 to study asteroids, thanks to a trio of solar electric ion propulsion engines.
NASA

If we're going to colonize a planet in another star system, we have to answer two questions. First, do any Earth-like planets even exist outside of our solar system? Thanks to NASA's Kepler telescope, the answer to this question is yes. Kepler, which was decommissioned in 2018, located nearly 2,700 planets — what astronomers call exoplanets — orbiting stars anywhere from a few hundred to a few thousand light-years away. Many of the exoplanets are gas giants similar to Jupiter and Saturn. But others are "super Earths," rocky planets slightly bigger than ours [source: Howell]. Some of those might possibly have the right conditions to be hospitable to human colonists.

The second question is purely logistical: How do we get to a planet located trillions of miles from our own? To answer this question, scientists will have to rethink space travel. For example, the idea that a single crew will fly to a remote planet is highly unlikely. Instead, spacecraft might need to carry family groups capable of living in space for generations [source: Feltman].

Scientists will also have to come up with better propulsion systems to cut the travel time. Nuclear fission- and fusion-based engines might be feasible, but more likely candidates include solar sails, ion-propulsion systems or antimatter rockets [source: Stromberg].

Light sails work by directing laser light onto a huge aluminum-foil sail. As photons strike the sail, they transfer momentum and push the sail forward. Ion-propulsion systems use solar panels to generate electric fields that accelerate charged atoms of xenon. Such an engine powered the Dawn mission, which hurled an unmanned spacecraft to two asteroids, Vesta and Ceres, before its mission was completed in November 2018. Antimatter rockets are the most efficient and achieve the highest speeds, but the technology is relatively untested. Such a rocket mixes equal amounts of antihydrogen and hydrogen, which annihilate each other in a combustion chamber to release enormous amounts of energy [source: Stromberg].

In the end, a combination of technologies may be the solution, proving once again that conquering deep space will require cooperation and collaboration among scientists of different disciplines and nationalities.