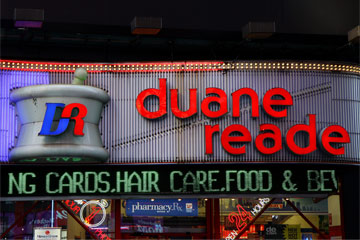 Regular old drugstores like Duane Reade are good for lots of things, but mixing up and packaging your prescription on-site isn't necessarily one of them. That's where compounding pharmacies come in.
Raymond Boyd/Contributor/Michael Ochs Archives /Getty Images

If you've ever found it impossible to swallow a horse pill with a sore throat or spent 45 minutes coaxing your dog to take the bitter tablet you've mashed into his food, you've probably wished there were a more palatable way to get medication.

Except in this case, your tart might be a topical estrogen supplement. That's a typical situation people find themselves in when using a compounding pharmacy. For example, a standard dose estrogen pill is too strong for many women, causing estrogen levels to spike too high. A compounding pharmacy would be able to create an estrogen dosage -- in a capsule, cream or any other number of forms -- that can better regulate the patient's hormone levels.

Have a child who can't stomach the taste of cough syrup? A compounding pharmacy could make it a kid-friendly grape flavor. A patient with an allergy to an inactive ingredient in his or her medication (say, coloring) could ask a compounding pharmacy to get the prescription without the offending variable.

And let's not forget Fido and friends. Compounding pharmacies might just be a godsend the next time you're trying to get your calico cat to swallow a pill. The pharmacy could substitute the pill for a fish-flavored liquid to sprinkle on your kitty's food, saving you the effort (and emotional turmoil) of prying open Fluffy's jaw and shooting a pill down her throat.

In the U.S., almost all original pharmacies did their own compounds until 1938, when the U.S. Food and Drug Administration (FDA) took over regulation of manufacturers, which then became the main producers of pharmaceuticals. But in 2012, compounding pharmacies have come under serious scrutiny. Just because your apple tart is homemade, after all, doesn't mean the ingredients are safe. A deadly fungal meningitis outbreak in 2012 (linked to contaminated steroid injections from a compounding pharmacy) even brings up questions about whether compounding pharmacies are bypassing FDA standards for bulk manufacturing.

Let's take a look at some criticisms that compounding pharmacies face.

If a compounding pharmacy is in the news, it's usually not for a happy reason. It probably doesn't come as a huge surprise that by nature of working with so many pharmaceuticals, compounding pharmacies can create big problems if their medicine is incorrect or contaminated.

One tragic example is the meningitis outbreak of 2012. One of the main issues of the case was that the company, the New England Compounding Center, was supposed to only create prescription medication for individuals. Instead, the company appears to have been making large quantities of its products and shipping them around the country. That means that the steroid injections that were contaminated were not limited to one patient, or even a few regionally. In fact, the company had shipped a whopping 17,676 vials of the stuff to 23 states [sources: Grady, Tavernise and Pollack]. Remember that each prescription is supposed to be made for one specific patient, so making compounds blindly in bulk (like our prepackaged apple pies) is illegal. And it's not the first time these pharmacies have been linked to contaminated medicines.

Compounding pharmacies don't have the same FDA regulations as pharmaceutical companies, so no one was monitoring the safety of the injections -- it was only after the outbreak occurred that the pharmacy was investigated. Which means that the New England Compounding Center had basically made itself into a drug manufacturer without the hassle of large-scale oversight. (If you're curious to hear more about the regulation surrounding these entities, read "Are compounding pharmacies regulated?")

Of course, that assumes that giant pharmaceutical companies don't have issues. One reason some advocate for compound pharmacies is that they avoid the cost of Big Pharma by using more inexpensive generics in mixtures. Sonia Gale, a pharmacy director in Washington state, says that lately insurance prices are creeping up on compounded prescriptions, however, as insurers ask pharmacies to charge on not just active ingredients, but on any inactive ingredients in compounds as well.

Some also argue that compounding pharmacies help patients seek out more natural forms of medication. For example, progesterone is a naturally occurring hormone that can't be patented by drug companies. Drug manufacturers instead patent Premarin and distribute it widely. Only issue? Their close-to-progesterone alternative is actually made from horse urine. If you're not into mare pee, a compound pharmacy can synthesize a generic alternative through a natural, plant-based method instead.

Whether you see compounding pharmacies as a good alternative to Big Pharma or a risky choice, read on for lots more information.

Before compounding pharmacies were in the news, I had no idea that one of the biggest pharmacy retailers in our town compounded. Although I was initially skeptical about the point of compounding pharmacies, I've come around to see that there can be a benefit to a custom-made alternative to Big Pharma. Especially when my alternative is horse urine.

How Perfume Works
What Is Ricin?
What Makes Glass Transparent?