Cosmic Rays Recreated in the Lab, With a Goal of Safer Space Missions

by Patrick J. Kiger May 12, 2017
Radiation in space poses a threat for both human bodies and electronic technology. AdStock/Universal Image Group/Getty Images

One of the big dilemmas in space exploration is how to protect against the intense radiation astronauts get exposed to once they venture outside the protective cover of the earth's magnetosphere.

That radiation is capable of wreaking havoc with astronaut's bodies at the cellular level, with potentially lethal results. As this 2016 study found, the Apollo program astronauts who journeyed to the Moon in the late 1960s and early 1970s subsequently experienced a death rate from cardiovascular disease that was four to five times higher than counterparts who either remained on Earth or flew only in low-Earth orbits. That's because the radiation moon-bound explorers experienced on the trip and on the lunar surface caused cell dysfunction in their arteries, which eventually caused blockages. And space radiation also puts astronauts at an elevated risk of developing cancer and a host of other ailments.

If we're going to figure out how to protect astronauts and their spaceships from cosmic rays, it helps to be able to study space radiation in the laboratory on Earth. A new article in the journal Nature details how scientists at the University of Strathclyde in Glasgow have been able to simulate the bombardment of particles that occurs in space.

According to a BBC News account of the research, the scientists do their work within a concrete bunker with a 10-ton metal door, designed to protect Glasgow's residents from exposure. Inside, they use a powerful French-made laser-plasma accelerator to produce short — as in billionths of a second — bursts of energy that, as one scientist explained, are the equivalent of all the solar energy that reaches the UK.

"Testing for a solution would ideally be done in space but this is costly," said physicist Bernhard Hidding in a press release. "Furthermore, space radiation is difficult to replicate in laboratory conditions with conventional radiation sources, which produce radiation with rather unnatural energy distribution. By using laser-plasma-accelerators, however, we were able to produce particle flux which more closely resembled conditions in space."

The negative effects the Apollo astronauts suffered were seen with relatively brief exposures. Space radiation would be a vastly bigger worry for astronauts on a lengthy trip to Mars. As this 2014 Wired article details, an astronaut who spent more than two years on a round-trip Mars mission might be exposed to a Sievert of radiation, which is about 1,000 times the background radiation that people experience annually on Earth.

Radiation isn't just a threat to living organisms; it also poses a threat to the sophisticated electronics on spacecraft. This NASA presentation details some of the malfunctions suffered by instruments on spacecraft due to radiation.

Now That's Interesting
The space radiation threat comes from two main sources. One is the sun, which releases a steady stream of energetic particles, in addition to occasional large bursts from explosions on its surface. The second source of particles is other stars, both in our Milky Way and other galaxies. Galactic cosmic rays, also known as GCRs, are mostly protons, and are so energetic that they can knock apart atoms in the material they encounter, unleashing subatomic particles from them.

Is Fake News the Problem or Are We?

The Strange Case of the Buried Ferrari 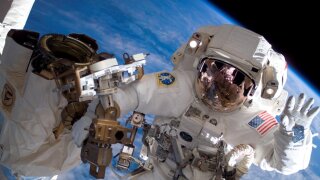 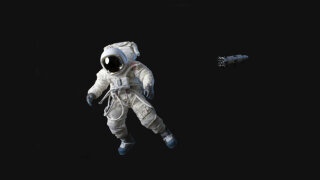 Stuff You Should Know: Using Poop and Pee to Reflect Cosmic Rays, an Elegant Solution