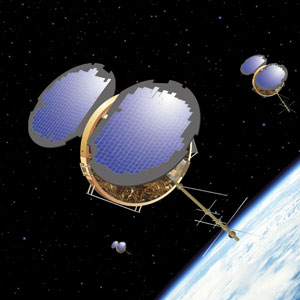 COSMIC is made up of a constellation of six microsatellites, the first to use radio occultation.
Illustration courtesy Orbital Sciences Corporation

Ever wonder why your Global Positioning System (GPS) device sometimes places you in the middle of a building, when you're pretty sure you're still on the street or sidewalk? Frustrating, yes, but the problem is not with the accuracy of the GPS network itself (the GPS satellites' locations are known quite precisely). The problem comes from distortions in the GPS signal caused by the atmosphere around you. Temperature, pressure and humidity in the air -- and even electrical variations in the upper atmosphere -- all have a cumulative effect on the GPS signal by the time it reaches your location.

Turning vice into virtue, COSMIC is a groundbreaking joint project by the United States and Taiwan that listens to the distortion in the GPS signal and calculates information that can be used to improve weather forecasting, predict climate change and monitor the Earth's changing magnetism.

Using a concept developed in the 1960s for the Mariner IV mission to Mars, and based on the success of a preliminary proof-of-concept experiment (Global Positioning System/Meteorology, or GPS/MET) in the late 1990s, the University Corporation for Atmospheric Research (UCAR) in Boulder, Colo., and Taiwan's National Space Organization (NSPO) reached an agreement in 2001 to develop a more robust experimental program. While its official title is the Formosa Satellite Mission #3/Constellation Observing System for Meteorology, Ionosphere and Climate (FORMOSAT-3/COSMIC), it is generally referred to in the United States simply as COSMIC. The NSPO is providing 80 percent of the $100 million funding for the project, with UCAR and other American agencies providing the rest [source: Henson].

Perhaps more interesting than COSMIC's name is what it's proposing to do. Its five-year mission is to show that it doesn't take a lot of resources to provide the kind of fundamental science needed to redefine meteorology and begin building the archive of accurate climatological data needed to improve existing climate models. This in turn will teach us a great deal about climate change.

Ultimately, the observations made by COSMIC could allow us to predict hurricanes, droughts, other major natural disasters and even thunderstorms much more accurately.

Next, let's take a look at the different components that make up COSMIC. 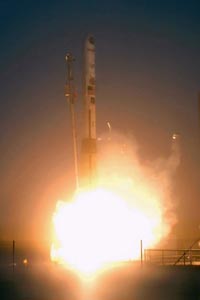 The Science of COSMIC

Before we explore the nuts and bolts of COSMIC, it helps to know a few details about the Earth's atmosphere that most of us learned in school but may have forgotten. The atmosphere is not too different from a multi-layer birthday cake, with each layer sitting atop the next, except that inhaling air in the atmosphere won't often give you a stomachache. Also, the dividing lines between atmospheric layers are not nearly as well-defined as layers of creamy chocolate frosting. The lowest level of the atmosphere is called the troposphere. It consists of the air that we breathe every day and is where most of the events we associate with weather take place. This layer goes from the ground up to around 6.2 miles (10 kilometers) above the Earth's surface.

Above that sits the stratosphere, which stretches from approximately 6.2 to 20 miles (10 to 30 kilometers) above the Earth. Originally thought to be very stable, air warming or cooling in the stratosphere is now known to cause significant changes in weather patterns in the troposphere, making this area an extremely worthwhile subject to study [source: Yalda].

The last thing we need to know about is the ionosphere, which consists of the ionized, or charged, particles in the upper atmosphere starting around 50 miles (80 kilometers) above the Earth. Intense solar radiation at this altitude dislodges electrons from molecules in the air, electrifying the atmosphere [source: UCAR]. If you've seen the aurora borealis, you've seen the ionosphere in action.

Now that we have a better understanding of what COSMIC is looking at, let's explore the instruments it uses to get the best view.

COSMIC's TIP and TBB instruments studying the ionosphere provide the kind of information critical to a better understanding and knowledge of "space weather." Space weather is what happens when solar flares strike Earth's magnetic field and charge the ionosphere. This causes some peaceful phenomenon, such as the awe-inspiring aurora borealis, which can often be seen from Earth's far northern latitudes. However, it can also cause violent solar flares, which have been known to destroy satellites, disable electrical instruments on Earth, and potentially harm astronauts in space. Knowing as much as we can about the ionosphere can help us anticipate these storms and prevent or minimize the damage that they cause. 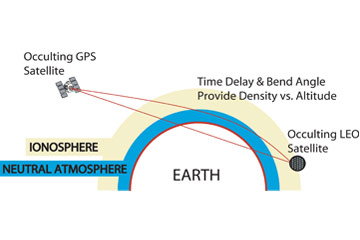 The Future of COSMIC

COSMIC's primary mission is to prove that using radio occultation and constellations of satellites provides useful data about our atmosphere [source: Anthes]. Already, data from the mission has been used to predict tropical storms more accurately. In 2006, Tropical Storm Ernesto formed in the Atlantic Ocean. Traditional weather prediction models failed to predict the storm's formation, but by adding COSMIC data to the model, prediction's about the storm's formation were very similar to what was actually observed [source: Anthes].

Perhaps even more important is how it can help us understand climate change. As we described earlier, radio occultation measurements create vertical profiles of the atmosphere. Because these measurements do not rely on any specific technology to be interpreted, they are ideal for long-term comparison. On the down side, difficulties separating the different effects of temperature, pressure and humidity limit the usefulness of some of the data below 5 miles (8 kilometers) and above 15 miles (25 kilometers) for climate research [source: Anthes].

Basically, COSMIC is taking a concept beyond the idea stage and showing that this technology can provide useful results. UCAR organizes an annual workshop to allow scientists to share information and learn more about what the data can be used for. The technology and method is not new, but actually having this kind of data available on a large scale is.

COSMIC's two data centers are responsible for providing the information (free of charge) to the international scientific community. As of April 2010, there were over 1,100 users from 54 countries [source: Schreiner]. Scientists use this data to improve their research and learn how to incorporate this type of information into their work more accurately.

Have some atmospheric research you'd like to use the data for? Registration is free on the CDAAC Web site, though you will have to let them know how you're going to use the information.

COSMIC is funded through 2011, with a possibility of continued funding after that [source: Schreiner]. Once the mission concludes, it's not entirely certain what, if anything, will replace it. UCAR and NSPO are both hoping to gain support for a sustained program with two to four times as many satellites doing the same thing, but providing much more complete coverage than is possible with just six satellites. If these hopes are realized, weather prediction could become so accurate that people might just have to find something besides the local forecast to joke about.

For more information on satellites, weather prediction and more, visit the links on the next page.

1988 -- First suggestion to use this method to study Earth's atmosphere

It's Only a Rolling Rock on Mars (But I Like It)
NASA's InSight Mission Detects Its First Marsquake
Hungry 'Hot DOG' Eats Nearby Galaxies, Fattens Its Black Hole 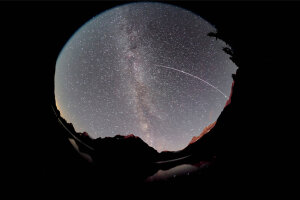 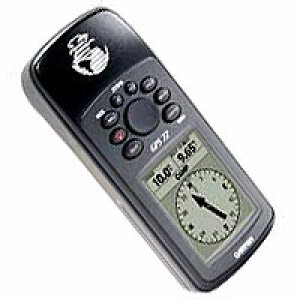