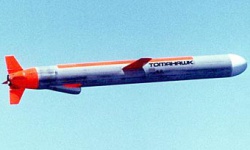 Tomahawk cruise missiles frequently appear in the news because they are the U.S. weapon of choice for a variety of quick-strike operations. With all of the missiles in the U.S. arsenal, have you ever wondered why cruise missiles seem to come up so often?

In this edition of HowStuffWorks, we will look at cruise missiles so that you can understand what they are, how they operate and why they are ideal for certain scenarios.

A cruise missile is basically a small, pilotless airplane. Cruise missiles have an 8.5-foot (2.61-meter) wingspan, are powered by turbofan engines and can fly 500 to 1,000 miles (805 to 1,610 km) depending on the configuration.

Cruise missiles come in a number of variations (see the links at the end of the article for more information) and can be launched from submarines, destroyers or aircraft. 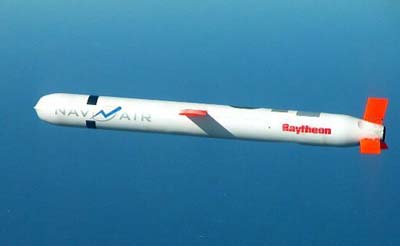 The booster falls away once it has burned its fuel. The wings, tail fins and air inlet unfold, and the turbofan engine takes over. 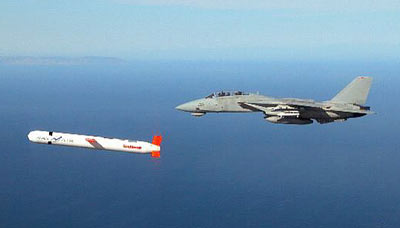 The hallmark of a cruise missile is its incredible accuracy. A common statement made about the cruise missile is, "It can fly 1,000 miles and hit a target the size of a single-car garage." Cruise missiles are also very effective at evading detection by the enemy because they fly very low to the ground (out of the view of most radar systems).

The IGS is a standard acceleration-based system that can roughly keep track of where the missile is located based on the accelerations it detects in the missile's motion (click here for a good introduction). Tercom uses an on-board 3-D database of the terrain the missile will be flying over. The Tercom system "sees" the terrain it is flying over using its radar system and matches this to the 3-D map stored in memory. The Tercom system is responsible for a cruise missile's ability to "hug the ground" during flight. The GPS system uses the military's network of GPS satellites and an onboard GPS receiver to detect its position with very high accuracy.

Once it is close to the target, the missile switches to a "terminal guidance system" to choose the point of impact. The point of impact could be pre-programmed by the GPS or Tercom system. The DSMAC system uses a camera and an image correlator to find the target, and is especially useful if the target is moving. A cruise missile can also be equipped with thermal imaging or illumination sensors (as used in smart bombs).