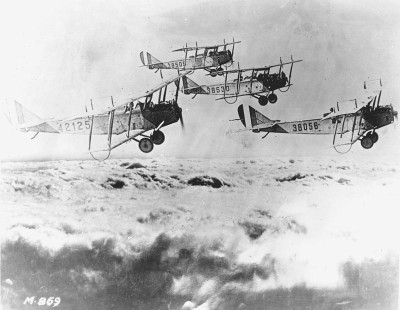 The United States played an important but limited role in World War I, and the Curtiss JN-4 "Jenny" became the only mass-produced American plane to play a major part in the conflict.

The impetus for the design of the Curtiss JN-4, the classic airplane that became the most famous American training plane of World War I, began with an Army requirement for a tractor-type (engine and propeller in front) aircraft. The Army's reasoning was simple: The rear-engine pusher types were killing pilots at an alarming rate, for in a crash the engines moved forward and crushed the fliers.

Glenn Curtiss had developed some ideas for fighter planes, but he took the precaution of hiring B. Douglas Thomas, who had worked for both Avro and Sopwith in England. Several designs were developed, and the best were incorporated into the Curtiss JN, which developed from the JN-1 through JN-6, and was inevitably called "the Jenny."

The pressures of World War I prompted not only the Army but also the Navy, Royal Flying Corps, and Royal Naval Air Services to buy the aircraft, which was eventually put into production in Canada. The most famous model, the American JN-4, appeared in 1916, powered by the Curtiss OX-5 engine of 90 sometimes-reliable horsepower. By 1918, the larger 150-horsepower Hispano-Suiza engine was installed, considerably improving the performance of this classic fighter plane.

The Curtiss JN-4 was produced in such numbers that the plane -- sold as surplus following World I -- dominated the civil-aircraft market for much of the 1920s.

More than 8,100 Curtiss JNs were built, and they were used to train 95 percent of the American airmen who learned to fly. The end of World War I, instead of ending the Jenny's career, gave it new impetus, as thousands of surplus Curtiss JN-4 aircraft were sold at very low prices to the public. This bonanza of inexpensive aircraft created the phenomenon of barnstorming -- but also tended to repress the aircraft industry in America, because no manufacturer could compete with the Jenny's low price. The Curtiss JN-4 remained in U.S. military service until 1927.

Big, clumsy, underpowered, and not a beautiful airplane, the Curtiss JN-4 is truly a classic airplane nonetheless, for it gave wings to the 1920s in a way that no other aircraft could have done.