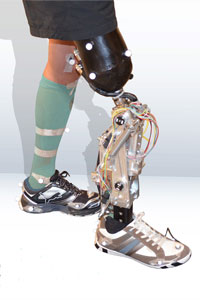 A version of this robotic prosthesis will be competing in the 2016 Cybathlon.
Image courtesy ETH Zurich, SMS Lab

Whether we're talking about A-Rod or Lance Armstrong, the choices of professional athletes have left a lot of us sports fans griping about "performance enhancements." We like our sports pure and our competitions an untarnished testament to the strength of the human body.

Unless, of course, those bodies are wearing fully functioning robotic exoskeletons while they compete. That we can get behind.

In October 2016, a competition called the Cybathlon will take place in Zurich, Switzerland, that's intended to showcase not only the talents of racing pilots (the term coined for parathletes who use assistive devices) but also the advanced robotics and engineering designed to make them stronger, faster and more agile. In fact, if a pilot wins a competition, both the pilot and the company or lab behind the assistive technology will have a medal hanging around their necks.

The sporting event arose courtesy of the Swiss National Center of Competence in Research (NCCR) Robotics to develop more assistive technologies for the people who need them and to explore what can happen when you mix talented competitors with cutting-edge tech. Superhumans, we hope.

The Cybathlon will have six different disciplines for its pilots, some of them probably familiar to us, but that doesn't mean the technology will be. For instance, the leg prosthetics race won't just feature the blades we're familiar with on Olympic sprinter Oscar Pistorius, although commercially available tech and research prototypes are fair game. Instead, they'll showcase runners wearing exoprosthetic devices, or ones worn externally, that can have powered joints. (Just no combustion engines, the rules are sure to specify.) The race involves a quick sprint and an obstacle course of stairs, slopes, gravel -- even a teeter-totter -- to test the functioning superiority of the device and the pilot's skill.

But let's look a little closer at the competition and technology in the five other Cybathlon events to get an idea of what the future of robotics and engineering can bring to athletes – and society at large. 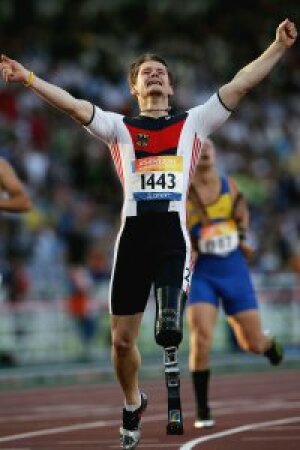 What sorts of prosthetics will you see in the Paralympics?