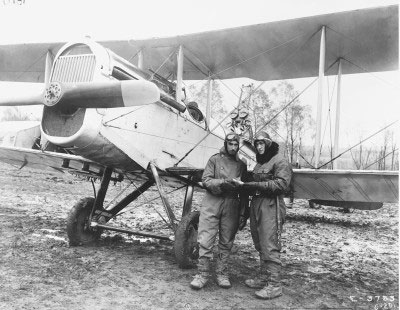 A de Havilland DH-4 that arrived in the United States in August 1917 became the prototype for DH-4s to be manufactured in the U.S. for use by American fliers such as the men seen here. See more classic airplane pictures.
HowStuffWorks.com

The British de Havilland D. H.4 (note the difference in designation from the American designation, DH-4) classic airplane was designed by Geoffrey (later Sir Geoffery) de Havilland, who would subsequently give Great Britain such magnificent aircraft designs as the Mosquito and Vampire. The D. H.4 made its first flight in August 1916, using a new British engine, the 200-horsepower Beardmore.

A large, handsome, two-bay, two-seat biplane of conventional construction, it was intended to replace the obsolete fighter airplanes at the front, such as the F.E. 2 d., in which so many hapless Royal Flying Corps crewmen had been slaughtered.

A De Havilland DH-4 rests in an American factory during World War I. By the time the DH-4 entered production in the U.S., it had been superseded by de Havilland's DH-9.

Production D. H.4s reached the front in 1917, and were soon supple­mented by later versions powered by the magnificent Rolls-Royce Eagle engine, which gave superb performance.

When the United States entered World War I in 1917, it had no air force and no aviation industry. Among the first decisions made by the infant Air Service was to produce de Havilland D. H.4s in this country, powering each with the brand-new American Liberty engine that generated 400 horsepower.

The Dayton-Wright firm was selected to manufacture the new "Liberty Plane" on August 14, 1917. In a miracle of industrial effort, the first hand-built model was flown hardly more than two months later, on October 29, 1917. Production built slowly at first, but ultimately 4346 were built. On August 2, 1918, American-built DH-4s went on their first combat mission.

At war's end in 1918, many De Havilland DH-4s were burned in France in what became known as the "Billion Dollar Bonfire." Examples that escaped this sort of foolish destruction were pressed into service in the U.S., where day and night mail runs, as seen here, were common.

Not surprisingly, the hybrid aircraft had many faults, the worst of which was a tendency to catch fire when its center-mounted fuselage tank was hit by gunfire -- earning it the nickname "flaming coffin." Nonetheless, the American DH-4 became the backbone of the postwar Air Service and was the standard airmail plane for many years. It served until the late 1920s. Virtually every U.S. Army Air Forces combat leader in World War II had flown the DH-4. 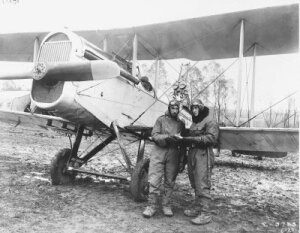 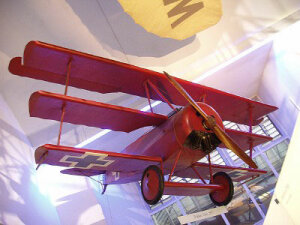 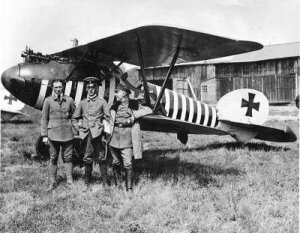