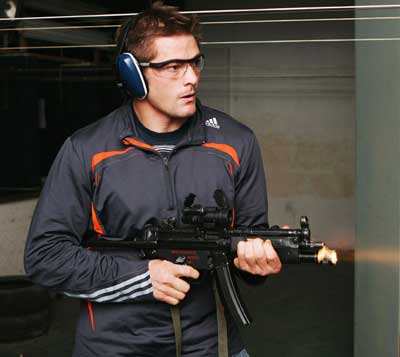 Delta Force is reputed to favor arms manufactured by Heckler and Koch, like the MP5, shown above.
Photo Ross Land/Getty Images

At its training facility, known in some circles as the "House of Horrors," Delta Force is believed to work tirelessly, honing its skills. Its facility is believed to include buses, trains and even a passenger airliner for staging hostage-rescue scenarios. The group refines its training in close-quarters combat, and since its members are also required to be excellent marksmen, they also practice shooting regularly.

The arsenal available to the Delta Force is said to be limitless. The very best weaponry the world has to offer is at its fingertips, and much of its arms are heavily customized. The force is believed to favor submachine guns made by Heckler and Koch, the German arms manufacturer. Specifically, the group is thought to prize the H&K M4 and MP5 as light weapons, along with the company's PSG1 7.62mm sniper rifle [source: Forces-Speciales]. They've also been known to use American manufacturer Browning's M82A1 .50-caliber sniper rifle for long-range targets up to 1,750 yards [source: Tekawiz].

Delta Force is believed to have worked directly with Heckler and Koch to develop the new 416 model, a carbine that fires 5.56mm rounds, as a replacement for the M4. High-performance submachine guns and high-powered sniper rifles alone do not make a successful Delta Force mission. In addition to its weaponry and extensive training, Delta Force also requires a lift. In many cases, operators rely on their squadron's aviation platoon. These platoons are composed of aircraft that are painted and outfitted to look like civilian helicopters. These aircraft are even said to have made-up civilian-class registration numbers on them.

In missions where it must appear that the United States government, military or federal agencies have no official involvement, the Delta Force aviation platoon serves the battle squadrons well. Operators invading in civilian clothes, in what looks to be civilian aircraft, create a tremendous amount of plausible deniability. After all, these people could just as easily be overzealous citizens or employees of a private security firm (a job that many former Delta Force operators take after retirement).

In special cases, the Delta Force calls in the Night Stalkers. Officially referred to as the 160th Special Operations Aviation Regiment (SOAR), this group of highly trained pilots flies Blackhawk and Little Bird helicopters close to the ground to deliver special operations forces like the Delta Force to its insertion areas. The Night Stalkers use night vision equipment, flying without lights in black helicopters at night. They pride themselves on being able to get to any destination within plus or minus 30 seconds of their stated time frame.

In the next section, we'll learn about the circumstances under which the Delta Force come face-to-face with their targets.

Despite what the Chuck Norris Fact Generator may say, the actor's portrayal of an operator in the movie "Delta Force" is flawed since it depicts the character in uniform. Another Norris film, "Invasion USA," is considered more accurate -- at least in Norris' dress and accessories. In the movie, Norris rarely dons a uniform, and he favors Israeli-made Uzis.