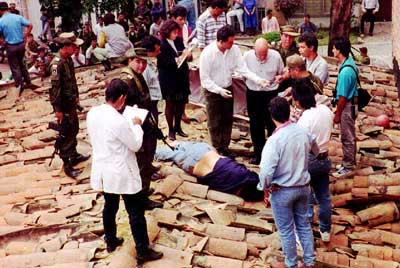 The body of Pablo Escobar on the roof where he died evading the Colombian (and possibly American) forces that eventually killed him.
Photo Medellin Police/AFP/Getty Images

There is no lack of people who try to track and document Delta Force's activities. There are blogs, organizations and Web sites dedicated to exposing what some believe to be illegal and unethical acts perpetrated by Delta Force. But outside observers have an extremely difficult time proving these allegations. Even in cases where the traces left from Delta Force operations lead back to the group, news reports have a tendency to disappear.

This seems to be the case in Kingsville, Texas. Allegedly, late one night in 1999, the town was besieged by low-flying, black helicopters, which inserted a small group of Delta Force operators onto the ground. These operators stormed two unoccupied buildings, using live ammunition and burning the buildings with detonated grenades before they were exfiltrated -- removed from the scene -- by the helicopters. This live-fire exercise was codenamed Operation Last Dance [source: World Daily Net].

A Web site called World Net Daily claims that United States Army officials later said that this group had grown bored of training on base and had opted to carry out training in real, populated American towns. The local newspapers wrote extensively on the staged attack exercise and Houston radio broadcaster Alex Jones gathered clippings of these articles.

But a search of the digital archives of the Houston Chronicle, the Dallas Morning News and the Kingsville Record reveals just one reference to the alleged event. In an article entitled, "Exxon Building For Sale?" the last use of the building is mentioned as being a training exercise ground for a special operations force. You can view that article here, but don't be surprised if the link is broken or it has changed. This is most often the case when it comes to links leading to articles on operations that may have been carried out by the Delta Force.

Some allegations have more support from the media. In 2004, reports surfaced in mainstream media that a secret prison operated and staffed by Delta Force members was located at the Baghdad airport. This prison, reserved only for insurgents and terrorists, served as the setting for torture methods like near-drowning, smothering and drugging [source: MSNBC]. And in 1985, Time magazine reported that several Delta Force operators had to be cleared to leave the country after they were dispatched to a hostage rescue mission in Sicily. They were under investigation by the federal government for embezzling and misappropriating money from the secret "black fund" that supports the group [source: Time].

Another allegation -- suggested by "Blackhawk Down" author Mark Bowden in his book, "Killing Pablo" -- is that Delta Force operators were the ones who killed Colombian drug kingpin Pablo Escobar. While the group is known to have been in Colombia when Escobar was gunned down, its members served as trainers for an elite Columbian counterdrug squad, the "Search Bloc." It was the Search Bloc, says the Columbian government, that fired the shots that killed Escobar [source: Diaz-Granados].

For lots more information, including links, continue to the next page.