What Makes a Great Rocket? 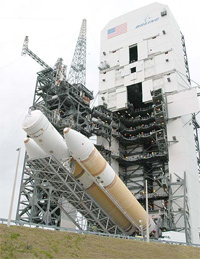 So if rockets are a means of transportation, just what are they transporting? Predominantly, a rocket's cargo (or payload) is a satellite (see How Satellites Work). Since they don't have the means of launching themselves, satellites use rockets to get off the ground and make it to the correct altitude above the Earth.

Satellites must also get to the correct orbit above the Earth. An orbit is a circular path that the satellite follows as it rotates around the Earth, in the same way that the Earth and the other planets in our solar system orbit the sun. Different orbits circle the Earth at different altitudes and at different speeds. A satellite's functions determine which orbit it must follow. Rockets both lift a satellite to the right altitude and insert it into the correct orbit.

But rockets need to be more than just a means of transport. Satellites are great tools; they have revolutionized communications and shown us more about our planet and the universe in which we live than we could ever have discovered without them. The one thing satellites aren't, though, is cheap. All those specialized components and their highly complex software, to say nothing of the huge quantities of fuel necessary for launch, represent major investments in time and money. This puts pressure on rocket engineers to create rockets that can deliver larger and heavier cargo in a single flight and do so with lower cost and higher reliability and accuracy. It's a lot cheaper to use one rocket to put two or more satellites into orbit. Another challenge is to accurately deliver a satellite to a specific location in space where it can most efficiently enter its orbit. Satellites are engineered to function in a precise way at a precise location -- if it's delivered too far away from the optimal place, the satellite's thrusters must expend precious fuel to make up the difference. The rocket needs to be reliable enough to deliver its cargo precisely where it needs to be.

Now let's take a closer look at the Delta IV family of rockets.

A Bit of Rocket Background

Simple rocket engines have been around for centuries. Originally invented in China, they have been used more recently as military devices, mainly for delivering bombs. For more information on their history and basic functions, see How Rocket Engines Work.

Space-faring rockets, however, are a modern development. On October 4, 1957, a Soviet Union rocket put the first artificial satellite, called Sputnik 1, into orbit. This was both a great technological achievement for the USSR and, occurring as it did during the Cold War, a wake-up call for the United States. One of the things the United States did in response was to create the first of the Delta expendable rockets. Built by Douglas Aircraft, Delta's design was based on the Thor intermediate-range ballistic missile originally developed for the U.S. Air Force. NASA conducted the first successful Delta launch, sending the Echo 1A satellite into orbit on August 12, 1960.

Since then, the program has continued to develop and evolve, each new version incorporating new technology into known technology and producing the Delta II, Delta III and Delta IV families of rockets.