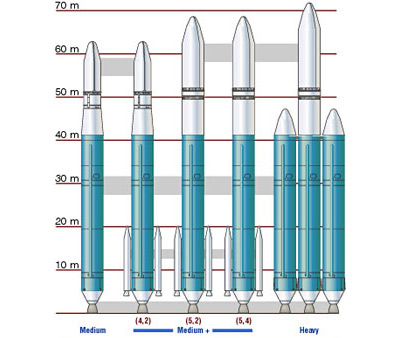 Each configuration has a first stage (the bottom two-thirds of the rocket) containing fuel tanks and main engines and a second stage (the top third of the rocket) that houses the secondary engine and fuel tanks along with the payload and various electronics. The Medium capacity's first stage consists of a single common booster core (CBC) powered by an RS-68 engine. Its second stage is powered by an RL10B-2 engine and includes various maneuvering and altitude-control electronics such as the Redundant Inertial Flight Control Assembly (RIFCA) used on the Delta II, as well as fuel and oxidizer tanks.

The Medium-Plus capacity has the same first stage components as the Medium capacity but also includes either two or four 60-inch-diameter (1.5-m), solid rocket, strap-on graphite epoxy motors (GEMs). All Medium-Plus versions use the RL10B-2 engine to power the second stage, but versions 5.2 and 5.4 have larger-diameter fuel tanks and longer oxidizer tanks than the Medium and Medium-Plus 4.2 versions.

The Heavy capacity looks like a rocket on steroids. Not only does it have the main common booster core, but it also contains two additional strap-on boosters.

Each of the three boosters contains its own RS-68 engine. The Heavy capacity also has in its second stage a 5-meter-diameter fuel tank and 5-meter-diameter, payload-accommodations hardware.