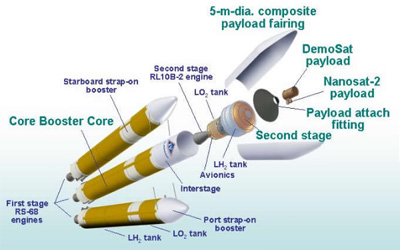 Now that you know the basic structure of the Delta IV family of rockets, let's see how all the different components work together to get the Heavy capacity off the ground and into the skies. As mentioned before, the rocket has two stages. The first stage has one goal: getting the rocket off the ground.

The bottom section of each common booster core (CBC) contains an RS-68 engine. The middle section contains the fuel tanks, in this case liquid hydrogen and liquid oxygen. For the two strap-on boosters, that's all there is. They exist exclusively to provide the extra fuel and engines necessary to lift heavier payloads into orbit.

New to the Delta IV family, the RS-68 is 30 percent more efficient than the liquid-oxygen/kerosene engines it replaces. It has fewer parts, making it more reliable and less expensive, and is environmentally friendly, producing steam as its only byproduct. It also produces 650,000 pounds (2,891 kN) of thrust at liftoff. Combining the three booster cores, the Delta IV Heavy rocket is capable of lifting 50,800 pounds (23,040 kg) to low-Earth orbit. Its closest brother, the Delta IV Medium-Plus (version 5.4), can lift 25,300 lbs (11,475 kg) to the same orbit. (To learn about satellite orbits, see How Satellites Work.)

How does the Delta IV Heavy stack up to other super-rockets?