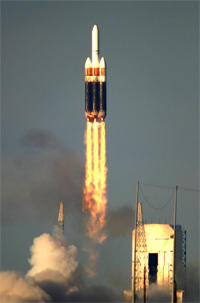 On December 21, 2004, the newest member of the Delta IV family lifted off from Cape Canaveral Air Force Station in Florida for its maiden flight. Close to six hours later, the rocket had delivered its payload and completed the mission. Unfortunately, the rocket was unable to reach the proper orbit. When scientists looked at the data, they determined that the first stage burn was not as long as they had expected it to be. However, with so much new and upgraded technology, to have only one thing go wrong caused a relatively minor blip on the radar screen. The Delta IV Heavy rocket's first test flight met all of its major test objectives and was considered a success.

Boeing is already making plans for improvements to the Delta IV Heavy rockets and for the creation of the next generation of Deltas. Some of the changes in the works are modifications to the RS-68 main engine, the addition of GEMs to the three CBCs and improvements in fuel density and pathways.

For more information on the Delta family of rockets, the Delta IV Heavy and related topics, check out the links below.