Beyond the Big Bang 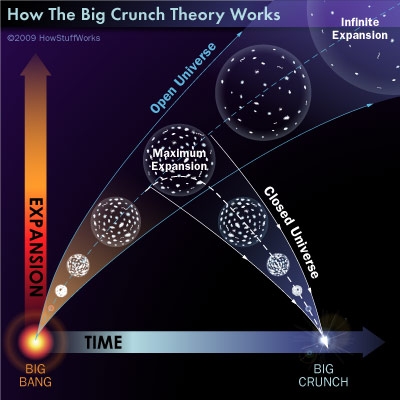 ­A­lmost all astronomers accept that the universe is expanding. What happens next is the real mystery. Luckily, there are only three real possibilities: The universe can be open, flat or closed.

Open Universe. In this scenario, the universe will expand forever, and as it does, the matter it contains will spread thinner and thinner. Eventually, galaxies will run out of the raw materials they need to make new stars. Stars that already exist will slowly extinguish, like dying embers. Instead of fiery cradles, galaxies will become coffins filled with dust and dead stars. At that point, the universe will become dark, cold and, unfortunately for us, lifeless.

Flat Universe. Imagine a marble rolling on an infinitely long wooden surface. There's just enough friction to slow the marble down, but not enough to do it quickly. The marble will roll for a long time, eventually coasting to a slow and gentle stop. This is what will happen to a flat universe. It will consume all of the energy from the big bang and, reaching equilibrium, coast to a halt far into the future. In many ways, this is just a variation of the open universe because it will take, literally, forever for the universe to reach the equilibrium point.

Closed Universe. Tie one end of a bungee cord to your leg, the other end to the rail of a bridge and then jump off. You'll accelerate downward rapidly until you begin to stretch the cord. As tension increases, the cord gradually slows your descent. Eventually, you'll come to a complete stop, but just for a second as the cord, stretched to its limit, yanks you back toward the bridge. Astronomers think a closed universe will behave in much the same way. Its expansion will slow down until it reaches a maximum size. Then it will recoil, collapsing back on itself. As it does, the universe will become denser and hotter until it ends in an infinitely hot, infinitely dense singularity.

­A closed universe will lead to a big crunch -- the opposite of the big bang. But what are the odds that a closed universe is more probable than an open or flat universe? Astronomers are beginning to come up with some educated guesses.