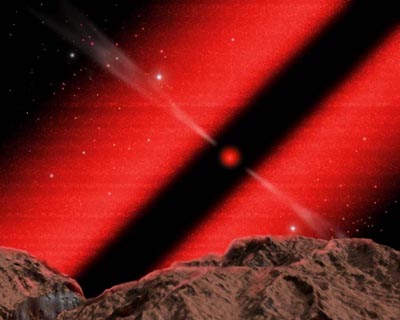 You may have heard someone say, "My desk has become a black hole!" You may have seen an astronomy program on television or read a magazine article on black holes. These exotic objects have captured our imagination ever since they were predicted by Einstein's Theory of General Relativity in 1915.

What are black holes? Do they really exist? How can we find them? In this article, we will examine black holes and answer all of these questions!

What is a Black Hole?

Artist concept of a black hole: The arrows show the paths of objects in and around the opening of the black hole.
Photo courtesy NASA

A black hole is what remains when a massive star dies.

I­f you have read How Stars Work, then you know that a star is a huge, amazing fusion reactor. Because stars are so massive and made out of gas, there is an intense gravitational field that is always trying to collapse the star. The fusion reactions happening in the core are like a giant fusion bomb that is trying to explode the star. The balance between the gravitational forces and the explosive forces is what defines the size of the star.

As the star dies, the nuclear fusion reactions stop because the fuel for these reactions gets burned up. At the same time, the star's gravity pulls material inward and compresses the core. As the core compresses, it heats up and eventually creates a supernova explosion in which the material and radiation blasts out into space. What remains is the highly compressed, and extremely massive,core. The core's gravity is so strong that even light cannot escape.

This object is now a black hole and literally disappears from view. Because the core's gravity is so strong, the core sinks through the fabric of space-time, creating a hole in space-time -- this is why the object is called a black hole.

The core becomes the central part of the black hole called the singularity. The opening of the hole is called the event horizon.

The concept of an object from which light could not escape (e.g., black hole) was originally proposed by Pierre Simon Laplace in 1795. Using Newton's Theory of Gravity, Laplace calculated that if an object were compressed into a small enough radius, then the escape velocity of that object would be faster than the speed of light.

Artist concept of a black hole and its surroundings: The blackened circle is the event horizon and the egg-shaped region is the ergosphere.
Photo courtesy NASA

There are two types of black holes:

The Schwarzschild black hole is the simplest black hole, in which the core does not rotate. This type of black hole only has a singularity and an event horizon.

The Kerr black hole, which is probably the most common form in nature, rotates because the star from which it was formed was rotating. When the rotating star collapses, the core continues to rotate, and this carried over to the black hole (conservation of angular momentum). The Kerr black hole has the following parts:

If an object passes into the ergosphere it can still be ejected from the black hole by gaining energy from the hole's rotation.

However, if an object crosses the event horizon, it will be sucked into the black hole and never escape. What happens inside the black hole is unknown; even our current theories of physics do not apply in the vicinity of a singularity.

Even though we cannot see a black hole, it does have three properties that can or could be measured:

Think you know everything about black holes and the universe? Test your knowledge with our Hole in the Universe Quiz.

How We Detect Black Holes 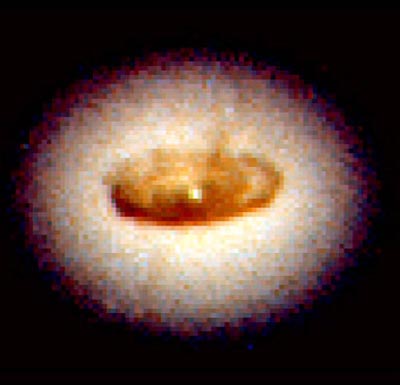 Although we cannot see black holes, we can detect or guess the presence of one by measuring its effects on objects around it. The following effects may be used:

Many black holes have objects around them, and by looking at the behavior of the objects you can detect the presence of a black hole. You then use measurements of the movement of objects around a suspected black hole to calculate the black hole's mass.

What you look for is a star or a disk of gas that is behaving as though there were a large mass nearby. For example, if a visible star or disk of gas has a "wobbling" motion or spinning AND there is not a visible reason for this motion AND the invisible reason has an effect that appears to be caused by an object with a mass greater than three solar masses (too big to be a neutron star), then it is possible that a black hole is causing the motion. You then estimate the mass of the black hole by looking at the effect it has on the visible object.

For example, in the core of galaxy NGC 4261, there is a brown, spiral-shaped disk that is rotating. The disk is about the size of our solar system, but weighs 1.2 billion times as much as the sun. Such a huge mass for a disk might indicate that a black hole is present within the disk.

Einstein's General Theory of Relativity predicted that gravity could bend space. This was later confirmed during a solar eclipse when a star's position was measured before, during and after the eclipse. The star's position shifted because the light from the star was bent by the sun's gravity. Therefore, an object with immense gravity (like a galaxy or black hole) between the Earth and a distant object could bend the light from the distant object into a focus, much like a lens can. This effect can be seen in the image below.

When material falls into a black hole from a companion star, it gets heated to millions of degrees Kelvin and accelerated. The superheated materials emit X-rays, which can be detected by X-ray telescopes such as the orbiting Chandra X-ray Observatory.

Schematic of a black hole in a binary system, showing the accretion disk around the black hole and emission of X-rays
Photo courtesy CXC/S.Lee

The star Cygnus X-1 is a strong X-ray source and is considered to be a good candidate for a black hole. As pictured above, stellar winds from the companion star, HDE 226868, blow material onto the accretion disk surrounding the black hole. As this material falls into the black hole, it emits X-rays, as seen in this image:

In addition to X-rays, black holes can also eject materials at high speeds to form jets. Many galaxies have been observed with such jets. Currently, it is thought that these galaxies have supermassive black holes (billions of solar masses) at their centers that produce the jets as well as strong radio emissions. One such example is the galaxy M87 as shown below:

Schematic diagram of active galactic nucleus with a supermassive black hole at its center
Photo courtesy NASA
The images on the left and bottom are ground-based radiotelescope images of the heart of galaxy M87. The image on the right is a visible image from the Hubble Space Telescope. Note the jet of material coming from M87.
Photo courtesy NASA/Space Telescope Science Institute Credit: NRAO, NSF, Associate Universities, Inc., NASA, and John Biretta (STScI/Johns Hopkins University)

It is important to remember that black holes are not cosmic vacuum cleaners -- they will not consume everything. So although we cannot see black holes, there is indirect evidence that they exist. They have been associated with time travel and worm holes and remain fascinating objects in the universe.

For more information on black holes and other space-related phenomena, check out the links on the next page!