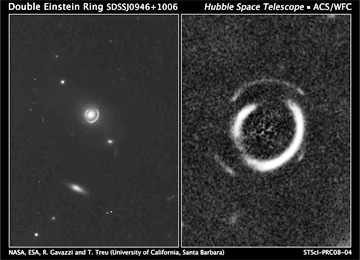 It's a double Einstein ring! Hubble snapped the photo of the gravitational field of an elliptical galaxy warping the light of two galaxies exactly behind it. Thanks, Hubble.
Image courtesy NASA, ESA, and R. Gavazzi and T. Treu (University of California, Santa Barbara)

Astronomers continued to find puzzling information as they studied the far-flung galaxies of the universe. A few intrepid stargazers turned their attention to galactic clusters – knots of galaxies (as few as 50 and as many as thousands) bound together by gravity – hoping to find pools of hot gas that had previously gone undetected and that might account for the mass being attributed to dark matter.

When they turned X-ray telescopes, such as the Chandra X-ray Observatory, toward these clusters, they did indeed find vast clouds of superheated gas. Not enough, however, to account for the discrepancies in mass. The measurement of hot gas pressure in galactic clusters has shown that there must be about five to six times as much dark matter as all the stars and gas we observe [source: Chandra X-ray Observatory]. Otherwise, there wouldn't be sufficient gravity in the cluster to prevent the hot gas from escaping.

Galactic clusters have provided other clues about dark matter. Borrowing from Albert Einstein's general theory of relativity, astronomers have shown that clusters and superclusters can distort space-time with their immense mass. Light rays emanating from a distant object behind a cluster pass through the distorted space-time, which causes the rays to bend and converge as they move toward an observer. Therefore, the cluster acts as a large gravitational lens, much like an optical lens (see How Light Works).

The distorted image of the distant object can appear in three possible ways depending on the shape of the lens:

By measuring the angle of bending, astronomers can calculate the mass of the gravitational lens (the greater the bend, the more massive the lens). Using this method, astronomers have confirmed that galactic clusters indeed have high masses exceeding those measured by luminous matter and, as a result, have provided additional evidence of dark matter.

Chandra to the Rescue

In 2000, Chandra observed a gigantic cloud of hot gas enveloping the galaxy cluster Abell 2029, leading astronomers to estimate that the cluster must hold an amount of dark matter equivalent to more than a hundred trillion suns! If other clusters have similar characteristics, then 70 to 90 percent of the mass of the universe could be attributed to dark matter [source: Chandra X-ray Observatory].