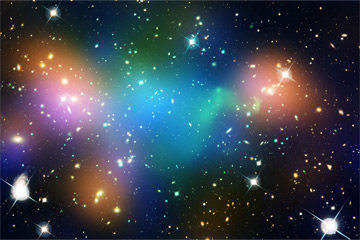 As astronomers gathered clues about the existence – and staggering amount – of dark matter, they turned to the computer to create models of how the strange stuff might be organized. They made educated guesses about how much baryonic and dark matter might exist in the universe, then let the computer draw a map based on the information. The simulations showed dark matter as a weblike material interwoven with regular visible matter. In some places, the dark matter coalesced into lumps. In other places, it stretched out to form long, stringy filaments upon which galaxies appear entangled, like insects caught in spider silk. According to the computer, dark matter could be everywhere, binding the universe together like some sort of invisible connective tissue.

Since then, astronomers have worked diligently to create a similar dark matter map based on direct observation. And they've been using one of the same tools – gravitational lensing – that helped prove the existence of dark matter in the first place. By studying the light-bending effects of galaxy clusters and combining the data with optical measurements, they have been able to "see" the invisible material and have begun to assemble accurate maps.

In some cases, astronomers are mapping single clusters. For example, in 2011, two teams used data from Chandra's X-ray Observatory and other instruments such as the Hubble Space Telescope to map the distribution of dark matter in a galaxy cluster known as Abell 383, which is located about 2.3 billion light-years from Earth. Both teams came to the same conclusion: The dark matter in the cluster isn't spherical but ovoid, like an American football, oriented with one end pointing to the observers. The researchers disagreed, however, on the density of the dark matter across Abell 383. One team calculated that the dark matter increased toward the center of the cluster, while the other measured less dark matter at the center. Even with those discrepancies, the independent efforts proved that dark matter could be detected and successfully mapped.

In January 2012, an international team of researchers published results from an even more ambitious project. Using the 340-megapixel camera on the Canada-France-Hawaii Telescope (CFHT) on Mauna Kea Mountain in Hawaii, scientists studied the gravitational lensing effects of 10 million galaxies in four different regions of the sky over a period of five years. When they stitched everything together, they had a picture of dark matter looking across 1 billion light-years of space – the largest map of the invisible stuff produced to date. Their finished product resembled the earlier computer simulations and revealed a vast web of dark matter stretching across space and mixing with the normal matter we've known about for centuries.