Is there a hole in the universe?

Browse the article Is there a hole in the universe? 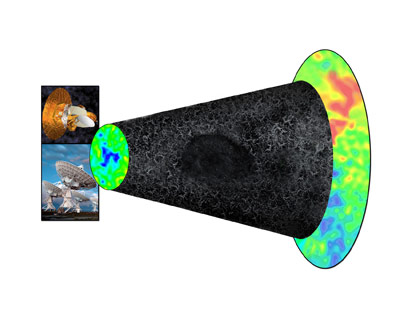 This picture depicts the spread of cosmic microwave background radiation, beginning with the universe just after the big bang (left), spreading through the universe's many galaxies, clusters and voids (center), and ending with a recent CMB map. In the giant void, the WMAP satellite (top left) detects a cold spot while the VLA radio telescope (bottom left) sees fewer galaxies.
Bill Saxton, NRAO/AUI/NSF, NASA

In August 2007, scientists from the University of Minnesota published an astonishing finding in the Astrophysical Journal. The universe, they declared, had a hole in it -- a hole far bigg­er than anything scientists have ever seen or expected. This "hole" spans almost one billion light years and is six to 10 billion light years from Earth, in the Eridanus constellation [source: Daily Tech]. (For reference, one light year measures about six trillion miles.)

What makes this vast area of the universe a hole? The area shows almost no signs of cosmic matter, meaning no stars, planets, solar systems or clouds of cosmic dust. Researchers couldn't even find dark matter, which is invisible but measurable by its gravitational pull. There were also no signs of black holes that might have gobbled up the matter once present in the region.

­T­he hole was initially detected by a NASA program studying the spread of radiation emitted from the Big Bang, which scientists believe spawned our universe. It was then further examined using information gleaned from the Very Large Array (VLA) telescope, used in the NRAO VLA Sky Survey Project to study large sections of the visible sky.

­One researcher described the find as "not normal," going against computer simulations and past studies [source: Yahoo News]. Other such holes, also known as voids, have been found before, but this find is by far the largest. Other voids amount to around 1/1000th the size of this one, while scientists once observed a void as close as two million light years away -- practically down the street in cosmic terms [source: CNN.com].

Astronomer Brent Tully told the Associated Press that galactic voids in all likelihood develop because regions of space with high mass pull matter from less massive areas [source: CNN.com]. Over billions of years, a region can lose most of its mass to a massive neighbor. In the case of this giant void, further studies may reveal some matter in the region, but it would still be far less than what is found in "normal" parts of space.

Earlier we said that the void was first discovered through a NASA program examining radiation stemming from the Big Bang. On the next page, we'll take a closer look at that program and how scientists can look far back into the universe's history -- almost to its beginnings -- in order to make discoveries like this one.

Dark Energy and Mapping the Universe

These two images depict temperature variations in the galactic void and surrounding regions. The image on the left was captured by a NASA satellite while the one on the right comes from a radio telescope used in the NRAO Very Large Array Sky Survey.
Image courtesy Rudnick et al., NRAO/AUI/NSF, NASA

­O­n June 30, 2001, NASA launched the Wilkinson Microwave Anisotropy Probe (WMAP), a satellite that has since been used to map cosmic microwave background (CMB) radiation. CMB radiation is billions of years old, a byproduct of the Big Bang that scientists detect in the form of radio waves. CMB radiation yields insights into the early history of the universe, showing what it looked like when it was as young as a few hundred thousand years old. And by examining the spread of CMB radiation, scientists can find out how the universe has developed since the Big Bang and how it will continue to develop -- or even end.

Until the giant galactic void was further studied by the University of Minnesota researchers, it was known as the "WMAP Cold Spot" because NASA scientists measured colder temperatures in the region than in surrounding areas. The temperature difference only amounted to a few millionths of a degree, but that was enough to indicate something was much different about that section of space.

­In­ order to understand why galactic voids show up as cooler, it's important to consider the role of dark energy. Like dark matter, dark energy is prevalent throughout the known universe. But in an area lacking dark energy, photons (originating from the Big Bang) pick up energy from objects as they approach them. As they move away, the gravitational force of those objects takes that energy back. The result is no net change in energy.

Both dark matter and dark energy remain rather mysterious to scientists. Much scientific research is underway to examine these substances and their roles in various cosmic processes. Dark energy may be even less understood than dark matter, but scientists do know that dark energy serves an important role in accelerating the universe's growth, especially in recent cosmological history. We also know that photons passing through dark energy allow for the kind of energy changes that produce varying temperatures that are in turn represented in the CMB map. Examining these temperature fluctuations allows scientists to learn how the universe is growing and developing. And considering that dark energy is the most common type of energy in the universe, it should continue to occupy a prominent role in cosmological research for years to come.

For more information about voids, dark energy and related topics, please check out the links on the next page.