Astronomers generally classify nebulae into two broad categories -- bright and dark. Bright nebulae are close enough to nearby stars that they glow, although the method in which they produce that glow depends on two factors. The first is a nebula's proximity to the star, and the second is the star's temperature. When a nebula is very close to a hot star, it can absorb large amounts of ultraviolet radiation. This heats the gas to about 10,000 Kelvin (9,726 degrees Celsius or 17,540 degrees Fahrenheit). At such extreme temperatures, the hydrogen gas becomes excited and glows with a fluorescent light. Astronomers refer to this type of nebula as an emission nebula. The Great Nebula in Orion (M42) is a classic emission nebula. 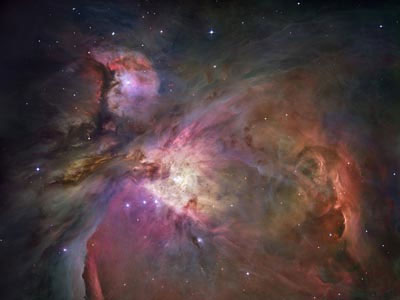 Courtesy NASA and STScI
The Orion Nebula is an emission nebula. It is illuminated and heated by four massive stars known as the Trapezium, which lie near the center of the image.

Sometimes, a nebula is farther away from a star or the star is not as hot. In this case, the dust of the nebular cloud reflects the light, much like tarnished silver reflecting candlelight. Most reflection nebulae take on a bluish color because the particles preferentially scatter blue light. A few, however, strongly reflect the light of the star that illuminates them. The Pleiades star cluster in Taurus contains several reflective nebulae.

Dark nebulae are not close enough to stars to be illuminated. They're visible only when something
brighter -- a star cluster, for example -- provides a backdrop. Sometimes, dark nebulae appear as lanes, alleys or globules within bright nebulae. The Trifid Nebula is a brilliant red emission nebula that appears to be divided into three regions by dark dust alleys. The Horsehead Nebula in Orion is also a dark nebula, as is the large dark band that divides the Milky Way in two along its length. 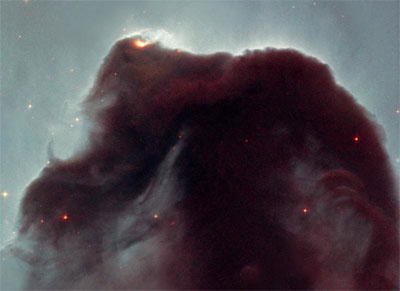 Courtesy NASA and STScI
The Horsehead Nebula is a dark nebula located in Orion. It is visible only because it lies above a lighter background.

In addition to being classified either bright or dark, nebulae also receive names. Charles Messier, a French astronomer, began to catalog non-star objects in the 18th century. Instead of using names, he used numbers. The first object he listed was the Crab Nebula in Taurus, which he designated Messier-1, or M-1. He designated the Ring Nebula M-57. Galaxies also made his list. The Andromeda Galaxy, the 31st object he recorded, became M-31. In the 19th century, amateur astronomers gave common names to almost all of the Messier objects, based on what they look like. That's how names such as the Dumbbell Nebula, the Horsehead Nebula and the Owl Nebula entered the astronomical lexicon. Some nebulae, such as the Orion Nebula, got named after the constellation that they appear to be part of.

Few names, however, hint at the vital role nebulae play in the cosmos. On the next page, we'll learn that nebulae do more than glow prettily in the night sky.