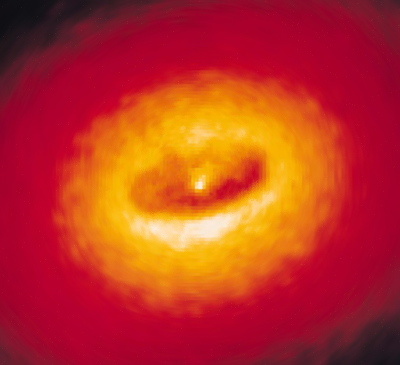 ­To answer this question, first we need to look at what black holes are and how they work. A black hole is what remains when a massive star dies. A massive star usually has a core that's at least three times the mass of the sun. Stars are huge, amazing fusion reactors. Because stars are so large and made out of gas, an intense gravitational field is always trying to collapse the star. The fusion reactions happening in the core are like a giant fusion bomb that's trying to explode the star. The balance between the gravitational forces and the explosive forces is what defines the size of the star.

As the star dies, the nuclear fusion reactions stop because the fuel for these reactions gets used up. At the same time, the star's gravity pulls material inward and compresses the core. As the core compresses, it heats up and eventually creates a supernova explosion in which the material and radiation blasts out into space. What remains is the highly compressed and extremely massive core.

This object is now a black hole. It literally disappears from view. Because the core's gravity is so strong, the core sinks through the fabric of space-time, creating a hole. What was the core of the original star now becomes the central part of the black hole -- it's called the singularity. The opening of the hole is called the event horizon.