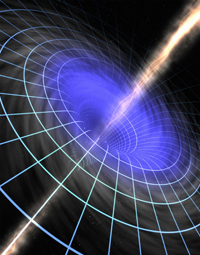 So, what if the sun were to become a black hole? It turns out that the chances of this actually happening are pretty much nil. The sun's core isn't large enough for it to become a black hole at all. When the sun dies, about 5 billion or so years from now, scientists believe it will expand into a red giant. As this happens, the sun will increase in size and most likely consume Mercury and Venus and possibly Earth. Eventually, millions of years later, the sun will quite literally run out of gas. When this happens, a planetary nebula will form, leaving behind a very dense, mostly carbon core about the size of Earth. At this point, the sun will then be a white dwarf. As its temperature continues to cool, it will eventually become a black dwarf.

Now, just for argument's sake, suppose the sun did become a black hole and the Earth and other planets managed to survive the transformation. Since the sun is a rotating star, its core would continue to rotate, making it a Kerr black hole with an ergosphere. Because the sun's core is very small, the ergosphere would also be small -- so small, in fact, that the planets would probably just continue to orbit in their usual manner. The black hole would have the same mass, and therefore the same gravity, as the original sun. Orbiting planets wouldn't notice any difference.

Obviously, if this were to happen, life as we know it would be changed dramatically -- but for a different reason. A black hole emits no light. Darkness would engulf Earth and it would be extremely cold. The oceans would probably freeze and any existing life forms would die off rather quickly. If humans could get underground with a good way to generate electricity and heat, they might survive. But it would be pretty bleak out on the surface.