Sundial, a device used to tell time by the sun. Nearly every sundial has two basic parts: a pointer, called a style or gnomon, which casts a shadow; and a numbered dial on which the shadow falls to show the hour. 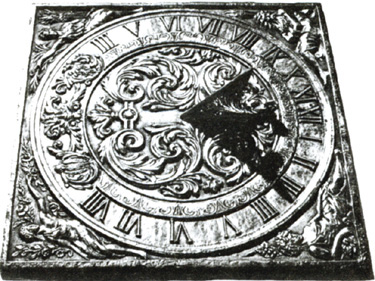 Sundial. The shadow on this 17th-century Flemish sundial shows the time to be just after 3 p.m.

An almost endless variety of sundials is possible. Some have flat dials, others curved; vertical sundials have been used on the sides of buildings. One of the most familiar types uses a flat, circular dial. Its style points due north (in the Northern Hemisphere) and forms an angle with the dial equal to the latitude of the sundial's location; this ensures proper movement of the shadow across the dial.

The time indicated by most sundials is apparent solar time, which differs by varying amounts during the year from standard time, the time kept by most clocks. In order to determine standard time from most sundials, a variable correction called the equation of time must be used. Unless the sundial lies exactly on a standard time meridian, a correction for longitude must also be made. Some sundials can be read directly in standard time. Such sundials have either a specially ruled dial or a movable dial that must be shifted periodically through the year. Accuracy of sundials varies with the design. Simple models tell time only within a few minutes of the correct time; some detailed and carefully built versions are accurate to within a minute or less. The sundial is one of the oldest known instruments for telling time. Its origins are uncertain, although it is mentioned in the Old Testament of the Bible and was used by the Babylonians and ancient Greeks. Sundials reached their greatest popularity near the end of the Middle Ages, when many different models were available. After mechanical clocks were developed, the sundial became mainly a decorative device for lawns and gardens.