Browse the article How do the Ig Nobel Prizes work? 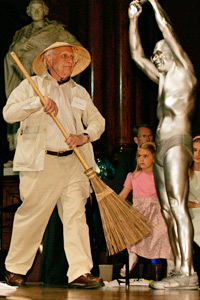 For all mad scientists there comes a time when, in a moment of clarity, they truly realize what they've just spent several years and buckets of grant money working on. At the time, they might find themselves eyeing their new gene-spliced insect feelers in the bathroom mirror. Or perhaps this sobering moment occurs in the midst of an arctic pursuit of their own murderous, corpse-stitched creation. In that moment, reason taps the scientist on the shoulder and whispers coldly in his or her ear, "Dude, you just spend six years researching THIS?"

What's that, you say? "The Fly" and Frankenstein are just fiction? Real research doesn't seek to answer ghoulish or seemingly unimportant questions? Well, perhaps you haven't read Kees W. Moeliker's 2003 inquiry into the existence of homosexual necrophiliac ducks or James Watson's 2004 study of exploding pants among New Zealand farmers in the 1930s. Yes, science is a big tent and, the more we answer the truly pressing questions about the universe, the more nagging all the little curiosities become. You could say we're fine-tuning our scientific understanding, which sometimes means developing the means to cure hiccups with "digital rectal massage." Seriously, read all about it here.

­Yes, each of these studies actually appeared in a legitimate scientific journal. Subsequently, each has received the highest honor that questionable, bizarre and downright funny science can aspire to: the Ig Nobel Prize. Not to be confused with the prestigious Nobel Prizes -- given out each year for various scientific, artistic and social achievements -- these prizes, as the name implies, award far more ignoble accomplishments.

In 2008, Paul Krugman of Princeton University won the Nobel Memorial Prize in Economic Sciences for his research on trade patterns and location of economic activity. The same year, a team of University of New Mexico researchers earned the Ig Nobel Prize in economics for determining that lap dancers ear­n higher tips while ovulating. Both of these studies were legitimate scientific investigations, but only one of them is hilarious -- and that's where the Ig Nobel Prizes enter the picture.

But just who decides what's "ig nobel," and do the winners actually show up for the ceremonies? Read on to find out. 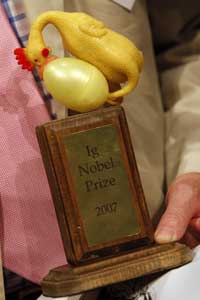 Scientific humor magazine the Annals of Improbable Research handed out the first round of Ig Nobel Prizes in 1991, honoring, among others, the inventor of antiflatulence pill Beano. The awards have continued every year since then, recognizing inventions such as the Veg-o-Matic, karaoke, fake dog testicles and "under-ease," perhaps the world's only airtight, charcoal-filtered underwear.

­The purpose of the award, according to the editors of Improbable Research, is to "honor achievements that first make people laugh, and then make them think." Furthermore, they stress that the 10 prizes aren't necessarily meant to pass judgment on the winners. Instead, the official Web site emphasizes that the prizes "celebrate the unusual, honor the imaginative, and spur people's interest in science, medicine, and technology."

In other words, the awards aren't about harmful science or necessarily even about weird or seemingly pointless science. Normally, you might not be interested in chemistry, but Mayu Yamamoto's 2007 prize-winning method of turning cow manure into vanilla flavoring is enough to pique anyone's scientific curiosity. In the words of Marc Abrahams, the Improbable Research editor and co-founder, the awards celebrate "achievements that cannot or should not be reproduced."

If you're reading this article in a laboratory -- perhaps while reclining in your own prototype pair of groundbreaking underwear -- you may be wondering how your own achievements might attract the attention of Improbable Research. Well, anyone can send in a nomination, and you can even nominate yourself. The magazine receives more than 5,000 new nominations every year, which are added to the collected nominees from previous years. Then, the Ig Nobel Board of Governors narrows the entries down to a list of finalists in 10 categories: nutrition, peace, archeology, biology, medicine, cognitive science, economics, physics, chemistry and literature. After each finalist has been investigated for authenticity, the board members cast their votes.

And just who makes up this shadowy board of governors? For starters, some of them are actually Nobel laureates -- yes, actual winners of real Nobel Prizes. Throw in a collection of science writers, athletes, public officials and a random person off the street and, according to the official Web site, you have yourself a team of Ig Nobel Prize judges.

Of course, just like the prestigious awards the Ig Nobels lampoon, it's not enough to announce the winners in a press release. You have to stage a full-blown awards ceremony. Each October, Improbable Research throws the ceremony at Harvard University, with help from the school's physics, science fiction and computer societies. As you might imagine, it amounts to a truly dorktastic party, complete with science-themed musical performances, audience-thrown paper airplanes and riveting, one-minute acceptance speeches by the honored prizewinners. In 2007, attendees even had the chance to bid on plaster foot casts of actual Nobel Prize laureates.

The awards themselves differ with each ceremony, featuring a rubber chicken and egg one year and a cereal box labeled "Ig Nobel O's" another. A few days following the event, the winners get the chance to expand their explanations to a whopping 10 minutes in a campus lecture hall.

­Yet, while most of the winners usually travel, at their own expense, to accept their award in person, n­ot everyone feels honored. On the next page, we'll look at some scientists who just can't take a joke.

The Ig Nobels: Honor or Ridicule? 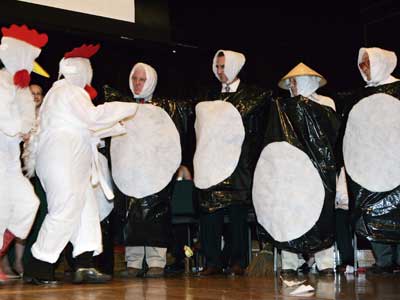 ­When the 2007 Ig Nobel Prizes rolled around, 10 more practitioners of weird science made the cut -- including the U.S. Air Force. Researchers at the military's Wright Laboratory in Dayton, Ohio, had been working on a particularly noteworthy chemical weapon: the "gay bomb." The idea was simple: Enemy soldiers wouldn't be able to do much fighting or defending if they were busy making mad, passionate love to each other.

Yes, the U.S. Air Force was financing the ultimate aphrodisiac, aimed at forcing even the most battle-hardened warriors to make love, not war. How could they not win that year's Ig Nobel Award for peace? Of course, no one was surprised when Air Force representatives didn't show up to accept the honors. If the Air Force was angered, however, the military agency at least opted not to unleash any chemical vengeance on the ceremony: No spontaneous lovefests were reported.

Most Ig Nobel laureates have at least taken the honor in good cheer, even if they weren't able to attend the festivities. Still, not everyone is a fan. Cereal researchers from the Institute of Food Research in the United Kingdom were good sports about the honor in 1995, but Robert May, the British government's chief scientific adviser at the time, wasn't laughing. In letters to both Nature and the Annals of Improbable Research, May took the Ig Nobel Prize organizers to task for ridiculing serious work, arguing that the awards should only target anti-science and pseudo-science and leave real scientists to their labors.

­Improbable Research Editor Marc Abrahams countered by stressing that the magazine goes to a great deal of trouble to contact the honorees beforehand and get their consent. He argued that most of history's great scientific breakthroughs have at least initially been received with laughs or yawns. He stated that the awards perform an important task in reminding everyone that, despite all the stuffy stereotypes, science can be fun, and scientists can enjoy a good laugh. Furthermore, the award affords winners some attention that such obscure studies, such as the University of Sidney's 2002 comprehensive survey of human belly button lint, might not otherwise enjoy.

­Wan­t to read all about past Ig Nobel Prize winners and find out just how leeches feel about garlic and sour cream? Explore the links on the next page and learn even more about the often-weird world of scientific research.

If you've ever read Umberto Eco's "The Name of the Rose" or seen the film adaptation, it's hard to read about May and Abrahams' debate and not be reminded of the argument between the novel's medieval sleuth Brother William of Baskerville and the blind monk Jorge of Burgos. The two characters engage in a very similar argument over humor, except in reference to religion and the divine. Can we laugh at God or science without undermining their importance to our lives and culture?