by Jane McGrath
Prev NEXT
3

Was a Children's Book Author 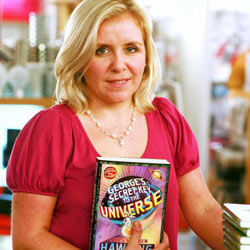 Perhaps one of the most unexpected facets of Stephen Hawking's resume is that of being a children's book author. In 2007, Stephen and his daughter, Lucy Hawking, collaborated to write "George's Secret Key to the Universe."

The book is a fiction story about a young boy, George, who rebels against his parents' aversion to technology. He begins to befriend neighbors, one of whom is a physicist with a computer. This turns out to be most powerful computer in the world, which offers portals to see and enter into outer space.

Of course, much of the book is meant to explain heavy scientific concepts, such as black holes and the origin of life, to children. In this context, it is very fitting that Hawking, who always sought to make his work more accessible, would want to write such a book.

The book was written to be the first of a series that would continue George's adventures. The next one in the series came out in 2009 and is called "George's Cosmic Treasure Hunt."