by Jane McGrath
Prev NEXT
2

Believed in Possibility of Aliens 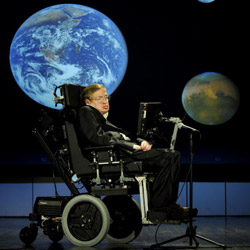 Hawking gives a lecture called "Why We Should Go Into Space" during NASA's 50th anniversary celebration in 2008.
Handout/Getty Images

Considering all of Hawking's work in cosmology, people are understandably interested in his opinions on the possibility of alien life. During NASA's 50th anniversary celebration in 2008, Hawking was invited to speak, and he mentioned his thoughts on the subject.

He expressed that, given the vastness of the universe, there very well could be primitive alien life out there, and it is possible, other intelligent life.

"Primitive life is very common," Hawking said, "and intelligent life is very rare." Of course, he threw in his characteristically sharp humor to say, "Some would say it has yet to occur on Earth" [source: Hawking]. He went on the say that humans should be wary of exposure to aliens because alien life will probably not be DNA-based, and we would not have resistance to diseases.

Hawking also did an episode on the possibility of aliens for "Into the Universe with Stephen Hawking" on the Discovery Channel (once a parent company of HowStuffWorks.com).

In this episode, he explains that aliens might use up their own planet's resources and "become nomads, looking to conquer and colonize whatever planets they could reach." Or, they could set up a mirror system to focus all the energy of the sun in one area, creating a wormhole -- a hole to travel through spacetime.