Physicist Stephen Hawking will have the opportunity to pursue a dream he's had for decades: to travel into space. Hawking, of course, is famous for his work in physics and cosmology, having dedicated much of his life to understanding the basic laws that reality follows. He's a heavy thinker destined for microgravity.

Richard Branson originally extended the offer to Hawking several years ago. The renowned scientist confirmed that flying into space was his "ultimate ambition" in a March 2017 interview with Piers Morgan on "Good Morning Britain" (skip to 9:15 in the video).

Branson and Hawking have known each other for years, with Hawking announcing the name of the SpaceShipTwo suborbital craft (VSS Unity) back in 2016.

Branson's company Virgin Galactic bills itself as the "world's first commercial spaceline." The company's goal is to make commercial space travel a reality. While companies like SpaceX focus primarily on working with organizations such as NASA, Virgin Galactic will cater to space tourism for ordinary folks. Well, ordinary folks with extraordinarily deep pockets — these flights aren't likely to be cheap. In fact, the company asks for an upfront deposit of $250,000 to guarantee your seat into space.

Shortly after release, the spacecraft ignites its rocket engine, accelerating it well beyond the speed of sound. After about a minute of rocket flight, the pilots will shut down engines and the passengers will experience microgravity. What the spacecraft will not do is go into orbit; it will remain below orbital altitudes and not reach a speed sufficient to orbit Earth. Instead, after a few minutes of floating around, passengers will return to their seats and prepare for the return trip home.

Branson's original hope was to see Virgin Galactic launch regular suborbital spaceflights by the end of 2009. That hasn't happened for many reasons, including a tragic incident in October 2014 in which the VSS Enterprise, a Virgin Galactic SpaceShipTwo test vehicle, crashed in the Mojave Desert. Co-pilot Michael Alsbury died in the plane crash. Pilot Peter Siebold sustained serious injuries but survived.

Late in 2016, Virgin Galactic completed a successful test flight of the VSS Unity SpaceShipTwo, in which it glided from 50,000 feet down to a safe landing. The company is working on a rocket test flight soon. Hawking's trip up to a suborbital altitude will happen at some point after these tests prove the craft are safe and spaceworthy.

While we don't know when that day will get here, it's clear Stephen Hawking will be ready when it does arrive. Hawking told "Good Morning Britain" that when Branson asked him if he'd like a seat on Virgin Galactic, he answered "yes" without a moment's hesitation.

Now That's Interesting
In the "Good Morning Britain" interview, Stephen Hawking told Piers Morgan that if he were able-bodied, he'd want to be stuck on a desert island with Marilyn Monroe, Albert Einstein and Galileo Galilei.

Watch This Robot Correct Its Mistakes Through Brain Waves 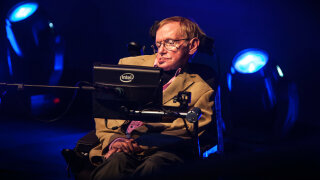 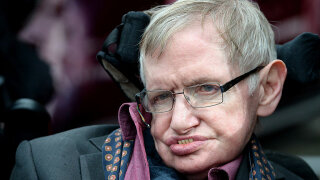