What Is Planck's Constant, and Why Does the Universe Depend on It?

Browse the article What Is Planck's Constant, and Why Does the Universe Depend on It? 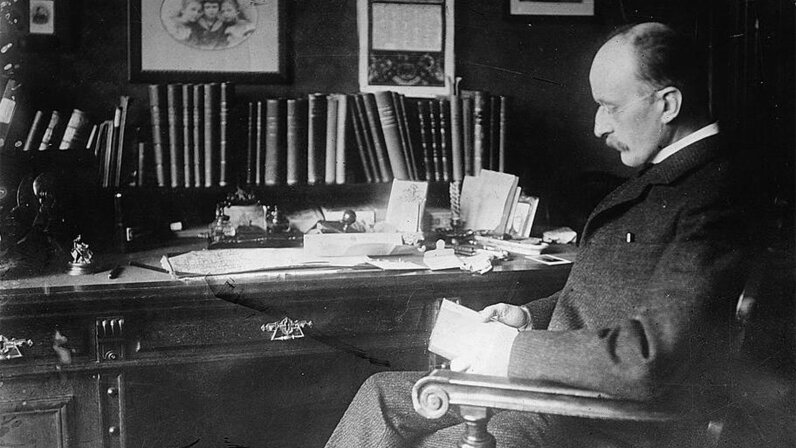 Planck's constant was devised in 1900 by German physicist Dr. Max Planck, who would win the 1918 Nobel Prize for his work. The constant is a crucial part of quantum mechanics, the branch of physics dealing with the tiny particles that make up matter and the forces involved in their interactions. Library of Congress

If you're a fan of the Netflix series "Stranger Things," you've seen the climatic season three scene, in which Dustin tries to cajole his brainy long-distance girlfriend Suzie over a ham radio connection into telling him the precise value of something called Planck's constant, which also happens to be the code to open a safe that contains the keys needed to close the gate to a malevolent alternative universe.

But before Suzie will recite the magic number, she exacts a high price: Dustin has to sing the theme song to the movie "The NeverEnding Story."

This may all have led you to wonder: What exactly is Planck's constant, anyway?

The constant — devised in 1900 by a German physicist named Max Planck, who would win the 1918 Nobel Prize for his work — is a crucial part of quantum mechanics, the branch of physics which deals with the tiny particles that make up matter and the forces involved in their interactions. From computer chips and solar panels to lasers, "it's the physics that explains how everything works."

The Invisible World of the Ultrasmall

Planck and other physicists in the late 1800s and early 1900s were trying to understand the difference between classical mechanics — that is, the motion of bodies in the observable world around us, described by Sir Isaac Newton in the late 1600s — and an invisible world of the ultrasmall, where energy behaves in some ways like a wave and in some ways like a particle, also known as a photon.

"In quantum mechanics, physics works different from our experiences in the macroscopic world," explains Stephan Schlamminger, a physicist for the National Institute of Standards and Technology, by email. As an explanation, he cites the example of a familiar harmonic oscillator, a child on a swing set.

"In classical mechanics, the child can be at any amplitude (height) on the swing's path," Schlamminger says. "The energy that the system has is proportional to the square of the amplitude. Hence, the child can swing at any continuous range of energies from zero up to a certain point."

But when you get down to the level of quantum mechanics, things behave differently. "The amount of energy that an oscillator could have is discrete, like rungs on a ladder," Schlamminger says. "The energy levels are separated by h times f, where f is the frequency of the photon — a particle of light — an electron would release or absorb to go from one energy level to another."

In this 2016 video, another NIST physicist, Darine El Haddad, explains Planck's constant using the metaphor of putting sugar in coffee. "In classical mechanics, energy is continuous, meaning if I take my sugar dispenser, I can pour any amount of sugar into my coffee," she says. "Any amount of energy is OK."

"But Max Planck found something very different when he looked deeper, she explains in the video. "Energy is quantized, or it's discrete, meaning I can only add one sugar cube or two or three. Only a certain amount of energy is allowed."

Planck's constant defines the amount of energy that a photon can carry, according to the frequency of the wave in which it travels.

Electromagnetic radiation and elementary particles "display intrinsically both particle and wave properties," explains Fred Cooper, an external professor at the Santa Fe Institute, an independent research center in New Mexico, by email. "The fundamental constant which connects these two aspects of these entities is Planck's constant. Electromagnetic energy cannot be transferred continuously but is transferred by discrete photons of light whose energy E is given by E = hf, where h is Planck's constant, and f is the frequency of the light."

"While these fundamental constants are fixed in the fabric of the universe, we humans don't know their exact values," Schlamminger explains. "We have to build experiments to measure these fundamental constants to the best of humankind's ability. Our knowledge comes from a few experiments that were averaged to produce a mean value for the Planck constant."

To measure Planck's constant, scientists have used two different experiments — the Kibble balance and the X-ray crystal density (XRCD) method, and over time, they've developed a better understanding of how to get a more precise number. "When a new number is published, the experimenters put forward their best number as well as their best calculation of the uncertainty in their measurement," Schlamminger says. "The true, but unknown value of the constant, should hopefully lie in the interval of plus/minus the uncertainty around the published number, with a certain statistical probability." At this point, "we are confident that the true value is not far off. The Kibble balance and the XRCD method are so different that it would be a major coincidence that both ways agree so well by chance."

That tiny imprecision in scientists' calculations isn't a big deal in the scheme of things. But if Planck's constant was a significantly bigger or smaller number, "all the world around us would be completely different," explains Martin Fraas, an assistant professor in mathematics at Virginia Tech, by email. If the value of the constant was increased, for example, stable atoms might be many times bigger than stars.

The size of a kilogram, which came into force on May 20, 2019, as agreed upon by the International Bureau of Weights and Measures (whose French acronym is BIPM) is now based upon Planck's constant.

Now That's Interesting
As this tweet from NIST explains, the writers of "Stranger Things" slipped up and utilized the 2014 value for Planck's constant, rather than the one that would have been available in the summer of 1985, when the episode was set. Virginia Tech's Fraas lays it all out in this video.