Discovering the Chemistry of Space Through Telescopes

You've probably snapped hundreds of photographs in your life. It's a great way to preserve memories and capture beautiful moments. But what if you had to figure out the chemical makeup of items simply by looking at a photograph of them? It sounds daunting, but it's similar to how astrochemists work. Instead of looking at photos, though, these scientists look at spectroscopic data — information taken from instrument observations of the way electromagnetic radiation is emitted, absorbed or dispersed by materials in space.

“Just like you have a distinguishable fingerprint from me, so does every molecule,” she explains. “We're studying the fingerprints of these given molecules in different environments. So once we have the full fingerprint, we know exactly how much of that molecule is there, how hot or cold it is, whether it's in a solid phase or a gas phase. And then we can actually put all together all the different fingerprints and sort of build up a chemical network and see what's actually going on.” Working with that spectroscopic fingerprint data to create a chemical profile of an observed object sounds a lot like assembling an intricate scientific jigsaw puzzle.

The discoveries that arise from analyzing celestial objects this way can be as amusing as they are awe-inspiring. Take, for example, the comet C/2014 Q2, now known as Comet Lovejoy. In October 2015, findings on the comet's chemical makeup were published, revealing that two of the 21 molecules identified were ethyl alcohol and glycolaldehyde. In layman's terms this means the comet is releasing alcohol, and lots of it, as it makes its way through space. Researchers estimate that Lovejoy can produce the equivalent of at least 500 bottles of wine per second.

Once the JWST is deployed and the scientific instruments begin collecting data, there's no telling what wonders will be revealed. The JWST can't look back toward the sun or all the instruments will be cooked, but there are plans to look at everything in our solar system from Mars out. The hope is that we'll piece together even more of the universe's chemical history in the process. Check out the video above to learn more about how astrochemists are getting to the heart of the matter.

NASA Urges You to Get Your Butt to Mars ... and Other Exciting Destinations 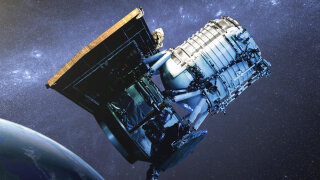 How do space telescopes die?

Peering Into the Heart of the James Webb Space Telescope