Browse the article Do Astronauts Need Sunscreen in Space? 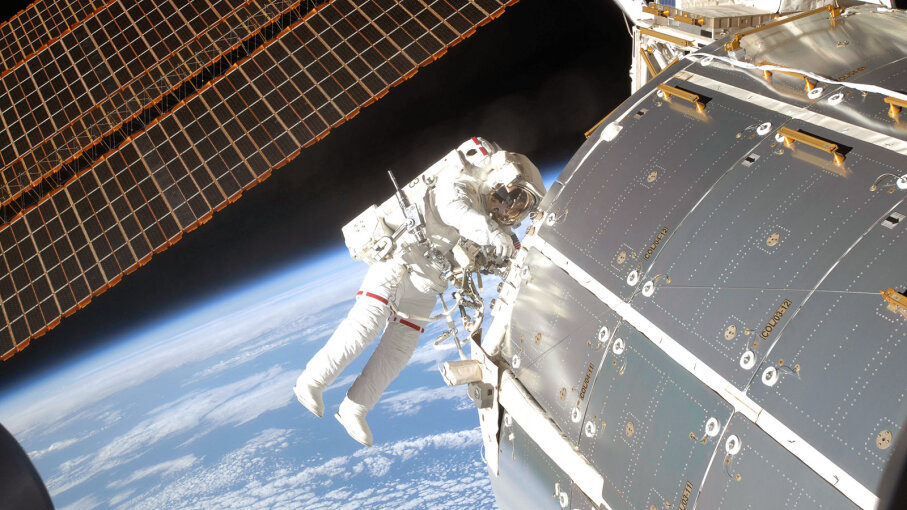 NASA astronaut Randy Bresnik makes a spacewalk in November 2009, during the final space shuttle flight to or from the International Space Station. His spacesuit protected him from the UV rays. NASA

NASA astronaut Neil Armstrong gazed through overlapping shields. While the Ohio native took his "one small step" onto the moon, he was wearing a transparent, bubble-shaped helmet fitted with visors that could be raised or lowered at will. The innermost visor and the bubble itself were made of polycarbonate shielding — a material that helped protect Armstrong from getting an overdose of ultraviolet (UV) radiation.

Like visible light beams, UV rays are electromagnetic waves released by our sun. Moderate exposure to some of those waves can do a body good. Contact with ultraviolet B (UV-B) rays, for example, prompts human skin to manufacture vitamin D3. But when we absorb too much of this radiation, DNA can get irreparably damaged, opening the door for skin cancer. And of course, we're all familiar with sunburns, another potential side effect of UV overexposure.

Besides UV-B, there are two other major UV radiation categories: ultraviolet A (UV-A) and ultraviolet C (UV-C). Each type moves at a different wavelength, with UV-A's being the longest. Rays of UV-C are considered especially harmful to human beings. We're very lucky, then, to have an ozone layer that absorbs nearly all of the UV-C rays — and most of the UV-B ones — that enter Earth's atmosphere.

Sunscreen offers us Earth-dwelling folk some measure of defense against the UV rays that pass through the ozone barrier. (FYI: Wearing appropriate clothes is a good idea, too.)

Yet the moon doesn't have much of an atmosphere, so its surface is awash in ultraviolet radiation. There's evidence to suggest that the abundant UV rays may be partly responsible for the levitating clouds of lunar dust we've observed on Earth's natural satellite.

With so much unfiltered UV radiation afoot, you might think that astronauts who visit the moon would come home with terrible sunburns. But that didn't happen to Armstrong and company. Spacesuits — including those donned by the Apollo explorers — are made with heavy fabrics that block out UV rays.

The suits also come with see-through helmets. For these — and for some of the attached visors — designers use ultraviolet-stabilized polycarbonate, an ultra-tough plastic that protects astronauts' faces from UV radiation. A lesser building material could leave the space travelers vulnerable to "snow blindness" and other optic conditions that may arise when UV rays damage parts of the human eye.

As it stands, there's really no need for a spacesuit-clad astronaut to put on sunscreen. That said, a member of the Gemini 9 crew did get a triangular sunburn on his back in 1963. Gene Cernan had been in low-Earth orbit, working on the exterior of his spacecraft, when the outer seams on his suit ripped, exposing him to intense solar heat.

The risk of contracting sunburn goes way down when astronauts are inside a spaceship. Aboard the International Space Station for example, astronauts regularly do their work in nothing but ordinary cotton shirts and pants. To protect them from sunburns, the ISS uses UV-blocking windows, as do most space exploration vessels.

Back on the moon, though, extraterrestrial UV radiation may have claimed some nonhuman victims. You know those six American flags that were planted up there? Some astronomers think that decades of bombardment from powerful UV rays could've bleached them white by now.

Learn more about the challenges of interplanetary exploration in "Interplanetary Outpost: The Human and Technological Challenges of Exploring the Outer Planets" by Erik Seedhouse. HowStuffWorks picks related titles based on books we think you'll like. Should you choose to buy one, we'll receive a portion of the sale.

NOW THAT'S INTERESTING
On the Apollo 12 mission, a TV camera was ruined when astronaut Alan Bean — the fourth man to ever walk on the moon — accidentally aimed it at the sun.