Does the U.S. military have rules about tattoos? 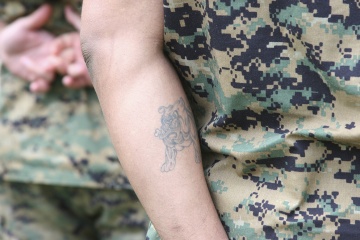 Tattoos aren't off limits for U.S. military members, but there are some restrictions.
Todd Headington/iStock/Thinkstock

The United States military provides a long list of rules and policies for enlisted soldiers and recruits. This list is frequently updated and revised, and it includes stringent rules about appearance, as all members of the military are expected to maintain a conservative, neat look.

All four branches of the U.S. military have their own policies regarding tattoos. They prohibit any explicit, extremist, gang-related or racist tattoos [source: Rawlings]. However, in 2013, the Army revised its tattoo policy, making its regulations the strictest of all branches.

First, a little history. In 2006, during the Iraq War, the Army suffered a shortage of recruits. It relaxed its tattoo policy and accepted soldiers with hand and back-of-the-neck tattoos. But once the war ended and they no longer needed so many troops, it could afford to enforce the rules again.

The new 2013 policy banned tattoos on the neck, hands and face. Members were limited to four tattoos that had to be below the knee or elbow and no larger than the size of a hand. Sleeve tattoos were verboten, and band tattoos could measure only 2 inches wide. Previously enlisted soldiers with tattoos were grandfathered in. The most controversial part of the change, though, was that anyone violating this policy (including grandfathered soldiers) was no longer eligible for commissioning (a promotion) without a waiver. The subsequent outcry from enlisted personnel forced the Army to review and revise its policies. In fact, one National Guard member filed a lawsuit in federal court in an attempt to have the policy declared unconstitutional [source: Tan].

In 2014, the Army responded to the controversy and revised its tattoo policy. The revision removed the rule that required existing soldiers to get a waiver to apply for a commission. The rest of the regulations, however, remain in place as of January 2015.