Could the Doomsday Ark Really Work? 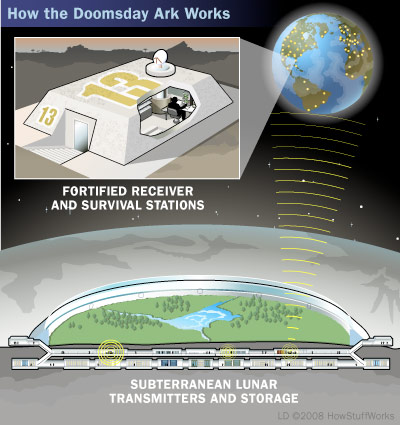 A radio transmitter on the moon could certainly continue sending out signals if a major asteroid hit Earth. But the plan seems to depend a whole lot on survivors' ability to access the ark's signals from Earth. This is what skeptics are really latching onto.

The plan goes like this: 4,000 heavily fortified radio receivers stationed on the Earth will be in contact with the ark, which will be transmitting constantly just in case something happens. The receivers would be housed in survival shelters that would also hold food and supplies for those who make it through humanity's misfortune. There appear to be several problems with the receiving aspect of the plan.

First, as protected as these radio receivers are, they would still have about the same chance of surviving Earth's destruction as the seed vault in Norway. The scientists behind the Doomsday Ark have an answer to this issue: The ark will just keep transmitting until the survivors can rebuild the receivers. This is a somewhat unsatisfying contingency plan, though. If those survivors are relying on the ark's moon-based transmissions to tell them how to smelt metal and grow crops, will they really have the means to build a suitable radio receiver in order to receive those transmissions in the first place?

The Doomsday Ark also falters on a much more basic point: How will anyone know where these survival stations are? Surely the locations couldn't be highly publicized, lest some anti-social sorts decide to attack them. So even if the radio receivers do survive, will anyone be able to find them?

Skepticism aside, proponents of the lunar ark are going ahead with what is surely an expensive project, although no specific figure has yet been announced. Scientists hope to have an initial, data-only version of the ark buried in the moon by 2020. A full-blown ark, containing living matter, could then be in position by 2035. This latter date would still be about 50 years before climate change could start wreaking havoc on humanity [source: Discovery].

Will this ark end up saving life on Earth? In the end, it all comes down to one crucial point: If the ark on the moon relies on Earth-based technology to be of any real use, could it do any good if the people of Earth find themselves back in the Stone Age? There's no clear answer. But the folks behind the ark seem to believe it's better to be prepared for the worst, and a faulty survival plan is better than no plan at all.

For more information on the Doomsday Ark and other survival plans, retreat to the links below.