Anatomy of a Drone Strike 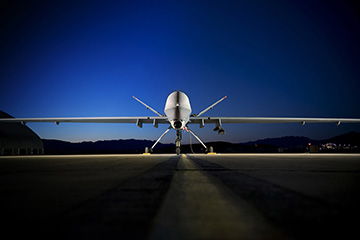 With a carrying capacity of more than 3,700 pounds, the Reaper drone packs a serious punch.
U.S. Air Force photo/Lance Cheung

The two armed drones in the U.S. arsenal are the ominously named Predator and Reaper drones. They actually look very similar, so it's not surprising that they share many characteristics. Both of these aerial weapons are propeller-driven, and both can be armed with laser-guided Hellfire missiles. Each is equipped with an antenna for communication with ground control during take-off and landing, while a satellite system is used to relay information when the drone is out of sight. This link goes both ways: The pilots can control the navigation, weapons and other systems on the drones, while the drones can send back information like images from its daytime and infrared cameras [sources: U.S. Air Force - Predator, U.S. Air Force - Reaper].

There are some significant differences, though. The Reaper is a bigger drone, boasting a wingspan of 66 feet (20.1 meters) versus the Predator's 55 feet (16.8 meters). With this size comes a number of advantages for the Reaper:

The Central Intelligence Agency (CIA) and an arm of the military known as the Joint Special Operations Command (JSOC) are both responsible for directing these armed drones, which are stationed at a series of secret bases across Europe, Africa and Asia and often flown by pilots who are actually in the United States. Initially, these agencies maintained "kill lists" consisting of suspected terrorists they targeted with strikes after receiving permission from the White House.

In 2013, however, the White House became more involved, working to formalize the process through what they termed a disposition matrix. This updated list, created by the National Counterterrorism Center, includes information on suspected terrorists like biographies, locations, associations and affiliated organizations. The list also includes strategies for how to deal with the terrorists, such as extradition, capture and drone strikes. Numerous high-ranking intelligence analysts and military officials review the list before it receives the final OK from the president. In the end, the president must approve all drone strikes outside of Pakistan; the CIA director can approve strikes within Pakistan [source: Matthews].

Eye in the Sky

The United States uses the cameras on drones to observe suspected terrorists on the ground, sometimes for days or weeks before a strike is carried out. Often, operators know the name of the terrorist leader they're targeting, making the attack a personality strike. Occasionally, however, they don't know the person but decide to strike because behavior patterns suggest the target is up to no good. These anonymous attacks are called signature strikes [source: Currier].