Earth's Oldest Rock May Have Been Discovered (On the Moon!)

Browse the article Earth's Oldest Rock May Have Been Discovered (On the Moon!) 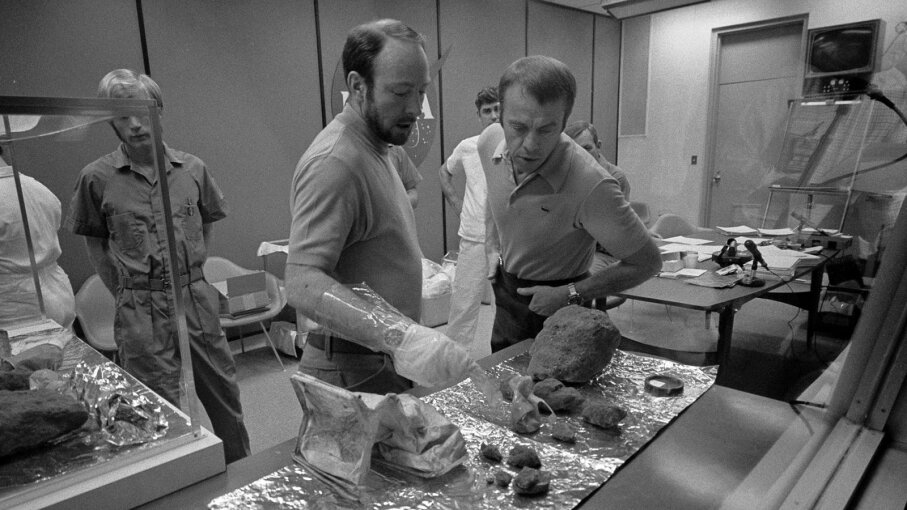 On Feb. 6, 1971, the late astronaut Alan Shepard, the commander of NASA's Apollo 14 mission, was taking a walk on the moon. He and fellow space traveler Edgar Mitchell were out busily gathering rocks around a depression called Cone Crater. To quote Shephard himself, many of these were "hand-sized grab samples," but the pair took home some larger mementos, too.

One basketball-sized rock — collected by Shepard — earned itself a nickname: "Big Bertha." Officially known as "Lunar Sample 14321," Big Bertha weighs about 19 pounds (9 kilograms), making it the largest rock that Apollo 14 brought back to Earth and the third-largest recovered by any of the Apollo missions.

Although Shepard found Big Bertha on the moon, that may not be where its story began. The rock is a breccia, a hodgepodge of geologic fragments called "clasts," which are held together by a cement-like mix. A newly published hypothesis says part of Big Bertha formed billions of years ago — right here on planet Earth. In fact, despite the lunar connection, this could represent the oldest "Earth rock" ever discovered.

Big Bertha's origins were the focus of a study that was published on Jan. 24 in the journal Earth and Planetary Science Letters. The paper's authors include an international team of geoscientists who looked at the moon rocks procured by Apollo 14, including Lunar Sample 14321. For the most part, the clasts on this famous breccia are dark gray, but there's also a lightly colored one that catches the eye.

It's made of felsite, a kind of volcanic rock that contains the minerals feldspar and quartz. The light gray clast, which is 2 centimeters (0.7 inches) across, is loaded with tiny zircon crystals as well. Many zircons contain vital information about what the environment was like when and where they formed.

Close inspection of the zircons in Big Bertha's light patch showed that the crystals were produced by cool, oxygen-rich magma. Yet molten rock of this sort doesn't exist anywhere near the moon's surface. To find some, you'd need to travel more than 100 miles (162 kilometers) below the surface of the moon where Shepard and Mitchell found Big Bertha.

So how did these zircons — and the clast they belong to — end up on the surface? A violent impact was probably involved. When a meteorite or asteroid smacks into a planet or moon, it can transport material that's buried deep under the crust up to the surface.

And as noted earlier, Big Bertha was found by an impact crater. So case closed, right? Well, maybe not. Cone Crater — an expanse measuring about 250 feet (76 meters) deep and 1,000 feet (304 meters) across — was created roughly 26 million years ago. Scientists think the violent episode that left this depression behind would've failed to dredge up any geologic material lying more than 45 miles (72.4 kilometers) underneath the moon.

The large rock in the center of the photo is lunar sample number 14321, referred to as "Big Bertha" and thought to be the oldest rock ever discovered from Earth.
NASA

Sure, Big Bertha's felsite clast could have originated deep in a lunar magma pocket. But it doesn't seem likely. The study authors think a different scenario is way more plausible.

Around 12 miles (19 kilometers) below planet Earth's surface, there's a supply of cool, oxidized magma. This is exactly the kind of raw material that probably made the zircons on Big Bertha's light patch. And by the way, zircon crystals have a helpful habit of preserving uranium isotopes. Those can be used for radiometric dating, a process that tells us the felsite clast is 4.0 to 4.1 billion years old.

Put both clues together and a potential timeline of events emerges. According to the hypothesis championed in the study, some magma lying 12 miles (19 kilometers) under Earth's continental crust hardened into this clast between 4.0 and 4.1 billion years ago.

We know that our planet was besieged by meteorites in those days (a process that created a lot of very old granites). Repeat impacts would have driven the clast ever closer to the surface until — finally — a projectile hit the Earth with enough force to launch the felsite clear out into space.

It's estimated that 4 billion years ago, our moon was around three times closer to Earth than it is right now. Supposedly, the far-flung clast bridged the gap and landed on the natural satellite. But falling meteorites harassed the moon, too. Approximately 3.9 billion years ago, one of these impacts partly melted the clast and drove it under the lunar surface, where it merged with other clasts and became part of a breccia.

Finally, 26 million years ago, the asteroid strike that gave birth to Cone Crater set Big Bertha free — propelling it to the spot where Alan Shepard came and grabbed the rock one historic day in 1971. What a wild ride!

A Matter of Time

If the felsic clast really did have a terrestrial origin, then ironically enough, it might be the oldest known rock from planet Earth. The 4.03 billion-year-old Acasta Gneiss from Canada's Northwest Territories is comparable in age. Over in Quebec, the Nuvvuagittuq Greenstone Belt is at least 3.9 billion years old. And out in the Jack Hills of western Australia, scientists have located zircons that formed roughly 4.37 billion years ago. But these crystals seemingly detached from their original rocks at some point. On the other hand, study co-author David A. Kring told Science magazine that Big Bertha's felsic clast and its zircons formed simultaneously.