by Jessika Toothman
Prev NEXT
4 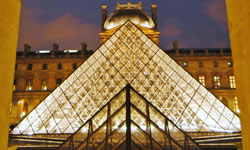 Ieoh Ming Pei, more commonly known as I.M. Pei, was born in 1917. Shortly after finishing his schooling, Pei was thrust into the spotlight with large-scale projects. Soon, he was receiving international acclaim and his firm became one of the most renowned in the world. Pei was also known for working out difficulties with tricky projects when other architects' relationships with their clients likely would have led to a project collapse. (Pun intended. These were architectural projects, after all.)

It's a tad irreverent perhaps, but many more pedestrian architectural fans will likely be familiar with the Louvre pyramids of "The Da Vinci Code" fame. That's I.M. Pei. In fact, many modern museum designs have been awarded to his firm over the decades. After years of prolific designs and developments on loads of prominent, large-scale projects, many in America, Pei began to focus on China and other East Asian countries. The shift in location also affected his style: When he returned to China to work, Pei carefully toed the line between tradition and modernity -- something the Chinese take very seriously.