by Jane McGrath
Prev NEXT
7 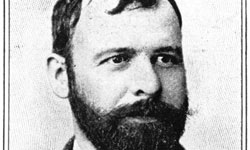 Louis Henri Sullivan was one of the first architects to design skyscrapers.
Hulton Archive/Stringer/Getty Images

Known for the principle of "form follows function," Louis Henri Sullivan was anxious to break free from tradition and became influential in forging a distinctly American architecture. Similar to Sir Christopher Wren, Sullivan benefited from a great fire. The Great Fire of 1871 in Chicago resulted in a construction boom and afforded architects like Sullivan with work for the decades to come. As a young man, he worked briefly in the offices of famed architects Frank Furness and then William Le Baron Jenney. He was only 24 years old when he became a partner in Dankmar Adler's firm in 1881.

As other architects like Jenney started implementing steel to allow for taller structures, the skyscraper was born. Sullivan was instrumental in creating a new functional design for these new tall buildings rather than sticking with outmoded traditions. Because of this, some refer to Sullivan as the "Father of the Skyscraper" (though others ascribe this title to Jenney). His designs also incorporated both geometric shapes and organic elements. Although most of his work was done in Chicago, his most famous work is the 10-story Wainwright building in St. Louis, built in 1890, and the 16-story Guaranty Building in Buffalo, built in 1894.

Another architect we'll explore later, Frank Lloyd Wright, who worked under him for six years, cited Sullivan as a major influence.