Browse the article How Brunelleschi Built the World's Biggest Dome 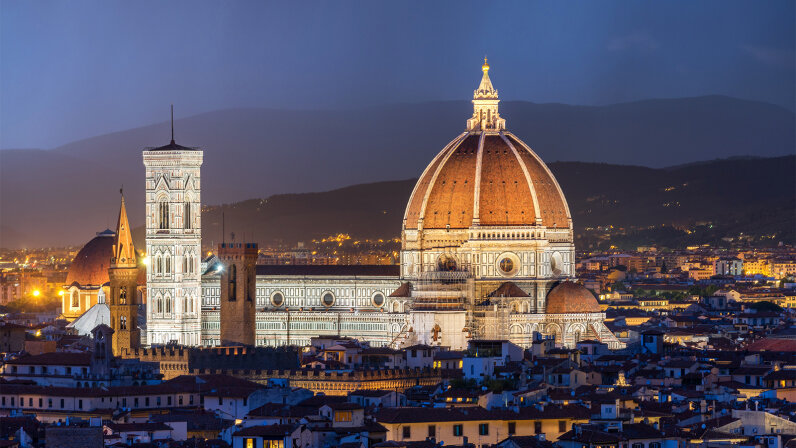 The Cathedral of Santa Maria del Fiore, also known as the Duomo, to this day defines the city Florence, Italy. Suttipong Sutiratanachai/Getty Images

To put it mildly, Filippo Brunelleschi wasn't exactly the most conventional choice to transform the landscape of Florence. So when the notoriously hotheaded goldsmith won a competition to design a dome for the city's cathedral in 1418, it may have come as a bit of a shock to the public, who'd been promised a world class cupola for the structure decades earlier. "Filippo Brunelleschi had no formal training as an architect or engineer and was widely mocked and derided when he proposed his design for the dome," says Nashville-based architect and designer David Wildman of duVisst/DesignWild. "His formal training was as a goldsmith and sculptor."

So how did this unlikely character wind up creating one of the most iconic architectural achievements, well, ever? Brunelleschi's out-of-the-box thinking is very likely what put this enduring Italian landmark on the map and helped solidify his reputation as one of the world's most famous innovators in art and engineering.

The Contest to Build a Dome Without Buttresses

When the Florentine fathers announced a contest for the ideal dome design in 1418, architects traveled from all over the world for a shot at fame (and a generous 200 gold florin cash prize). But the objective wasn't simple — the dome would have to be almost 150 feet (46 meters) across and have to start 180 feet (55 meters) above the ground, atop the existing walls of the church, which was built in 1296. The other major issue: The building plans didn't include pointed arches or the use of flying buttresses, which are inclined beams that carry a half arch projecting from the walls of a structure to a pier that supports the weight of a roof, dome or vault. Both of these elements were commonly used in the traditional Gothic style employed by rival cities like Milan. And they were the only known elements that could actually hold up a structure as monumental as the dome of a cathedral — whoever won the contest would need to envision some way around their absence.

"It was built without any centering support which was traditionally used to support a dome during construction and it was also built without any buttresses which were commonly used to reinforce domes from spreading," Wildman says. "The choice to build the cathedral without buttresses had been made prior to Brunelleschi winning the competition for the dome. There wasn't enough wood in Tuscany to construct centering to support the dome and so the design of the dome called for an ingenious solution."

The dome is decorated with magnificent frescoes depicting the Last Judgement of Christ. Begun by Giorgio Vasari, they were completed by Federico Zuccaro around 1579.
Lisa Kling/Getty Images

Luckily, Brunelleschi had just the solution. To get around the issue, the contest contender proposed building two domes instead of one — one nested inside the other. "The inner dome was built with four horizontal stone and chain hoops which reinforced the octagonal dome and resisted the outward spreading force that is common to domes, eliminating the need for buttresses," Wildman says. "A fifth chain made of wood was utilized as well. This technique had never been utilized in dome construction before and to this day is still regarded as a remarkable engineering achievement."

While Brunelleschi's conceptual plan intrigued city officials, he was tight-lipped on the details, refusing to explain his exact strategy for completing the project, and even getting into a shouting match with the overseers who called him "a buffoon and a babbler" and had him kicked out of the assembly. "Part of why we don't understand more about the dome is due to the secrecy employed by Brunelleschi during construction and after," Wildman says. "He was forced to work with a rival to whom he had previously lost a high profile design competition. He left few details about the construction of the dome behind, and intentionally obscured details about its construction to minimize the chance that his ingenuity could be easily copied. He was jailed during the construction at the behest of the guild masters of stone and wood but the charges were quickly dropped."

And while Brunelleschi managed to bounce back from the snafu and snag the coveted spot as the new dome's architect, he continued to keep the majority of his creative and construction plans concealed. "Since much of the details of the dome are hidden in its walls, there is still some mystery as to how all of the components of the dome connect with each other," Wildman says. "There are 24 reinforcing vertical arched ribs (eight visible and 16 hidden within the wall) that connect the inner and outer dome and reinforce the brick walls that form the dome."

What is known about Brunelleschi's prized project is that his vision required a completely new way of thinking about building. "Brunelleschi's design not only required ingenuity in design and engineering, but ingenuity in construction as well," Wildman says. "To build the dome without centering required the invention of multiple techniques. He invented an ox-driven hoist that brought the tremendously heavy stones up to the level of construction. The hoist was gear driven with a clutch that allowed the hoist to be reversed without reversing the direction of the oxen. This technique had never been utilized before. The platforms for the workers were cantilevered from the walls of the dome and pockets were built in the walls to support these platforms. The accuracy of these pockets is remarkable, and it is believed that the platforms needed to be accurate and level so that the geometry of the dome could be ascertained by chains and string lines that were used to guide the masons in laying brick."

A view of the internal stairs to the dome of the Florence Cathedral.
Giuseppe Zanoni/Getty Images

The unprecedented building strategies didn't stop there. "To construct the brick walls of the dome, Brunelleschi employed a novel herringbone pattern that allowed the brick to self-reinforce as it was being laid so that the bricks wouldn't fall off the wall as it became more inclined," Wildman says. "Brunelleschi noticed that marble for the project was being damaged as it was unloaded off of boats and so invented an amphibious boat that could be used on land to transport the large pieces of marble to the cathedral."

All in all, the construction of Brunelleschi's brainchild took 16 years to complete (although it took another decade for a lantern to be added on). The construction of the Dome of Santa Maria del Fiore kicked off in 1420 and was completed in 1436, and the end result was mind blowing to say the least. "The dome of the Florence Cathedral to this day is the largest masonry dome ever built," Wildman says. "It's estimated that it used over 4 million bricks and that the dome weighs over 25,000 tons (22,680 metric tons)."

Brunelleschi died ten years after the completion of the dome, and he was buried in the crypt of the cathedral. The nearby plaque commemorating his legacy celebrates his "divine intellect" and to this day, the unlikely visionary remains an architectural icon not just in Italy, but throughout the world.

Now That's Exhausting
Visitors can actually climb to the top of Brunelleschi's cupola, but they'll need to be prepared to climb its 463 steps, as there is no elevator.