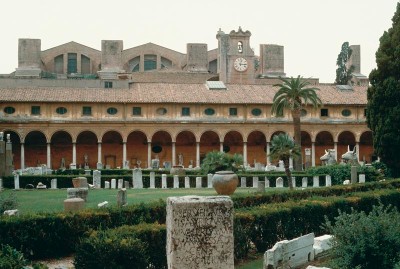 Michelangelo started working on Santa Maria degli Angeli in Rome just one year before he died.

The work on Santa Maria degli Angeli (1563-64) was commissioned by Pope Pius IV, and it was one of Michelangelo's most unusual commissions. It involved the transformation of the remains of the Roman Baths of Diocletian, a center of social and physical indulgence, built in 305 A.D., into a Christian church. The massive complex's interior was originally adorned with marble of various colors, painted stucco, and pagan statues. Michelangelo used the huge space of the central hall as the light-filled and expansive transept of the church. The project was completed in 1564 by Jacopo LoDuca.

Lauren Mitchell Ruehring is a freelance writer who has contributed promotional commentary for the works of many artists, including Erté and Thomas McKnight. She has also contributed to publications such as Kerry Hallam: Artistic Visions and Liudmila Kondakova: World of Enchantment. In addition, she has received recognition from the National Society of Arts and Letters.