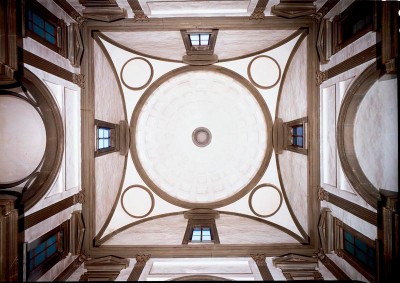 The Medici Chapel dome (1519-34) by Michelangelo can be seen in San Lorenzo, Florence.

The Medici Chapel by Michelangelo, a simple structure intended to house the tombs of Giuliano and Lorenzo de' Medici, was commissioned in 1519 by Cardinal Giulio de' Medici to mirror another Florentine structure, Brunelleschi's Old Sacristy for San Lorenzo from the 1420s.

The coffered Medici Chapel Dome echoes that of the Roman Pantheon, although Michelangelo's dome is much more airy and well lit. Michelangelo paid close attention to the positioning of the chapel's windows to achieve the illumination so crucial to the mood and purpose of the structure. The four floating circles placed at the base of the dome add to its buoyant, soaring effect.

An interior view of the Medici Chapel with Michelangelo's tomb for his former patron, Lorenzo de' Medici (1520-34).

The figures Michelangelo planned for the Chapel steadily increased in size throughout the first stages of construction. The above figures, sumptuously sculpted and polished, are set against a stark but elegant two-tone backdrop of dark gray Tuscan limestone supports and white plaster walls.

The Medici Chapel is adorned with sculptures, Corinthian capitals, and fluted pilasters.

Though never finished, the Medici Chapel is the only one of Michelangelo's great architectural-sculptural projects to be realized in anything approaching entirety. After Michelangelo left for Rome in 1534, never to return to Florence, the sculptures in the chapel were installed by his pupils. This view highlights the artist's elegant use of dark stone (pietra serena) and light-colored marble to define the chapel's architectural elements.

Go to the next page for more interior views of the Chapel and to learn about the architecture of the Tomb of Giuliano de' Medici by Michelangelo.